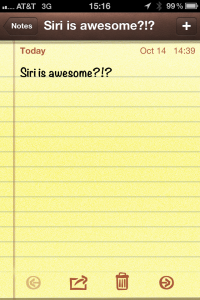 As my colleague Steve Przybylski reminds me Margaret Atwood once said something isn’t science fiction any longer once it is actually here. I won’t say that Apple’s acquisition of Siri, and putting Siri’s technology front and center in iOS5 for the iPhone 4S means that we’re there yet, but in my brief experience the seeds of a revolution that is just starting.

I tested Siri out this morning at home once the new iPhone 4S was delivered, activated and set up. It send text messages, it sent emails, it found restaurants and gave me directions. OK, all that is advertised. I then tried it with my Jawbone ERA Bluetooth headset on and got pretty good results, although the recognition was not as crisp as when not on the headset. Siri does learn though.

My colleague Steve Przybylski’s last name was a tough one for it to recognize, but after several tries it managed to give me the right Steve out of my address book. After a few more tries if I said, “text Steve” it just pulls him up without the last name.

But more impressive was when I took the iPhone 4S and Siri for a drive as I headed into work. Using the Bluetooth headset, I managed to send four emails, three text messages and took several notes. This with auto noise and a podcast playing. I won’t say that the recognition was spot on. It wasn’t. But it was close enough for this early stage. And that I think is the key. Apple says Siri is in Beta. I hope that means there is more to come as Siri learns and as Apple moves this platform forward.

When Bluetooth headset manufacturers can give us access to Siri with a programmable button it will make so much sense for those driving. When Apple lets others hook into Siri it will be killer. I really want to be able to take notes while driving into Evernote, as an example.  Evernote allows that, but I’d love this all to be under Siri’s control.

Siri in this early stage has some real limitations. It goofs at times. It seems to have too short of a time if you pause while talking before it moves on. It can’t recognize inflection and so you need to add them by saying “question mark?” or “period.” I can live with that because I feel like I’m in on something new, much like I felt when I picked up my first smartphone or Tablet. (No that first smartphone wasn’t an iPhone, although my first one of those felt pretty special too.) I can just sense that this is not only a noble beginning, but a beginning of something that is going to change how we relate to our devices, and thus our world, in the future.

You can tell I’m excited here. Well, I’ve been this way a few times in my life with gadgets and technology but not with every new gadget or innovation. Already, Apple with Siri has proven that it recognizes that there is great room for innovation in how we communicate digitally. Apple can only fail by not moving this forward as quickly as it can.

I’ll say this if you have an iPhone 4. Siri is reason enough alone to upgrade to a 4S in my view. It promises to be that transformational. I may be completely in a gadget lust frenzy here on this point, but I sense something really exciting ahead.