The Chevy Spark and Sonic are the first vehicles to integrate Siri with the car, allowing drivers to activate Siri from the steering wheel for hands free control of the iPhone 4S or iPhone 5 on iOS 6.

Apple announced the enhanced support for in-car infotainment systems at WWDC 2012, and the Chevy MyLink system in the 2013 Spark and Sonic is the first to arrive with Siri Eyes Free support.

The Eyes Free functionality is available on the Spark 1LT and 2LT models as well as the Sonic LTZ and RS models, which will arrive in early 2013. 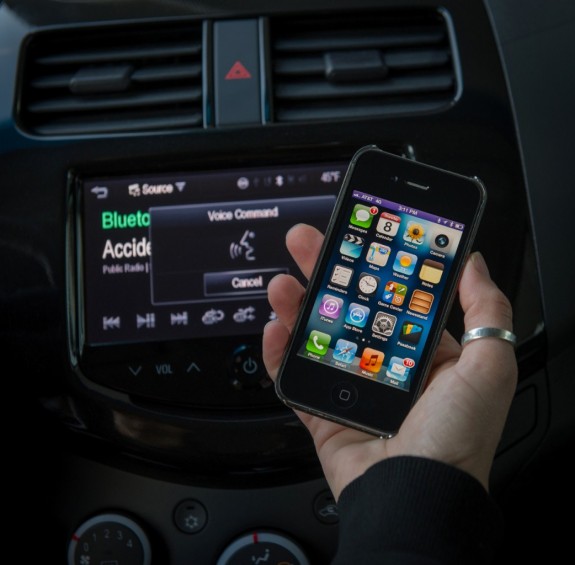 The Chevy Spark and Sonic are the first to support Siri Eyes Free.

While using Siri Eyes Free mode, users will hold a button on the steering wheel that activates Siri and passes the voice command through the system to Siri to make calls, send texts and other functions like playing an iTunes song.

In Eyes Free mode Siri cannot perform complex tasks that require opening a web page. Hopefully Siri can still be used to open apps, so users can switch from Rhapsody to Audible in the middle of a long trip. The audio and commands are passed via Bluetooth through the MyLink system to the iPhone 4S or iPhone 5.

Unlike holding the home button to activate Siri, with Eyes Free, the iPhone screen remains dark. This allows the driver to stay focused on the road. GM demonstrates how Siri Eyes Free works in the 2013 Chevy Spark in the video below.

Siri already works in many vehicles without the Eyes Free mode, but requires the driver to press the home button on the iPhone.

The Ford Sync system, which competes with Chevy MyLink, allows drivers to use Siri while pressing the home button on the device, for controls through the car audio system.

Siri is smart enough to know that it should read back text messages before sending while the iPhone is connected to Bluetooth, but it sounds like the Eyes Free mode is a natural extension of offering access to services while cutting down on driver distractions.

Look for more Siri Eyes Free support at the 2013 Auto Show from Mercedes, Toyota, Honda, BMW and others.