Though iOS 6.1 isn’t yet available for consumers to download, Apple has already seeded the forthcoming version of its mobile operating system to developers. And as such, developers have discovered there is a feature inside iOS 6 that allows consumers to tap Siri‘s voice assistant feature to purchase movie tickets, thus expanding the capabilities of Siri.

According to 9 to 5 Mac, Siri won’t be able to purchase those movie tickets directly. Instead, the transaction purchase is negotiated through third-party app Fandango, which is among the first apps to tap into Apple’s Passbook mobile digital wallet feature inside iOS 6 to allow for quick paperless ticketing. 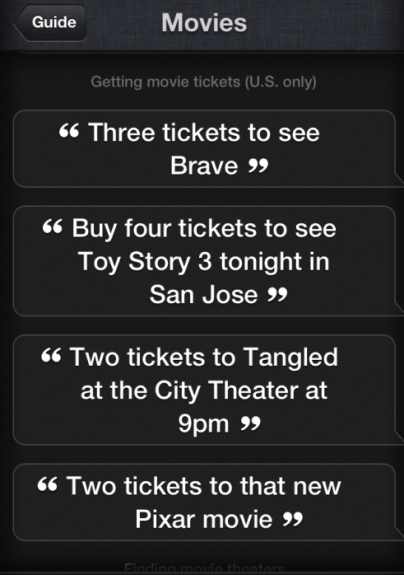 Users could search via voice through Siri to look up movie times, theater information, and then ask to purchase tickets. Once customers are ready to buy tickets, there is an option to launch Fandango. 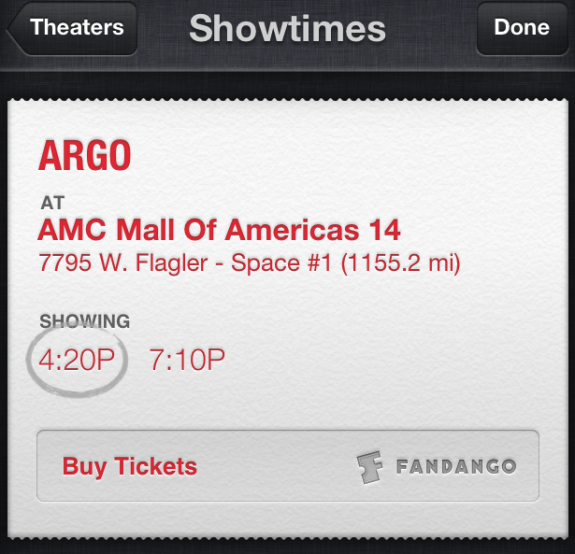 Presumably, there will be an option for Passbook tickets through Fandango once the process is completed.

It’s unclear what the impact to Fandango this integration will have and if Apple will open up Siri to other developers and even to Fandango’s rivals.

When Apple launched Siri with the iPhone 4S, the feature was initially lauded for being more intelligent than traditional voice command applications before it, but since then, rival Google has launched Google Now on Android, which matches a lot of Siri’s features, including displaying local search information, local weather, sports scores, and restaurant listings. Google Now, with its integration through Google’s search engine and with access to a user’s search history if granted, has the potential to be more intelligent with time.

If Apple does open up Siri to third-party developers with iOS 6.1, it will definitely be interesting to see the potential of Siri expand. Restaurant reviews through Yelp, reservations via Open Table, and even flight bookings can potentially be made with Siri in the future.