To say Apple isn’t a fan of jailbroken iPhones an iPads is an understatement. Now that you can Jailbreak the iPhone 4S, may people are asking if Apple has cut off access to Siri on jailbroken iPhone 4S devices.

While some apps take steps to prevent jailbroken iPhones from using their services, such as the Time Warner Cable app, Apple appears to be leaving us alone for now.

After performing the iPhone 4S jailbreak using Absinthe I was still able to use Siri to perform all the actions that normally work.

To test this out I ran through my common Siri uses, and only ran into one case where things didn’t work. 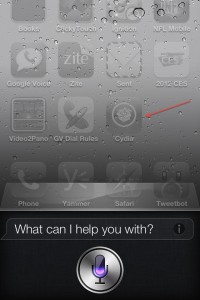 I am chalking that up to a bad network connection, as it happened somewhat regularly before the jailbreak.

Everything appears to be working on my jailbroken iPhone 4S running iOS 5.0.1. That’s not to say that Apple won’t try to figure out how to cut off our access to Siri. Thankfully, they have to find a way that doesn’t accidentally break Siri for the millions of regular iPhone 4S users, so it will complicate things.

I am hoping that we soon see jailbreak apps on Cydia designed to do more with Siri. I’m not sure if, or when, it will happen, but I am hoping to get Twitter access and the ability to launch specific apps.

Have you jailbroken your iPhone 4S?