Apple is pushing out iOS 5.1.1, the latest security and bug fix update for iOS 5.1 out to the iPad, iPhone and iPod Touch.

The new update is available as an over the air download, but users who want to jailbreak the iPhone 4S on iOS 5.1 should avoid this update. iPhone 4 users hoping for the iOS 5.1 untethered Jailbreak should not update to iOS 5.1.1.

Apple typically include security fixes to prevent jailbreaking in small updates like this. In practice, it is best for potential jailbreakers to avoid these patches. 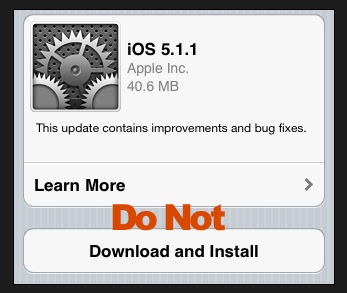 iPhone hacker Pod2g discovered two major exploits needed for the iPhone 4S jailbreak last week, and it’s not yet clear if this update patches these exploits.

If it is ok to update to iOS 5.1.1 on the iPhone 4S or the new iPad, @pod2G, @MuscleNerd or @p0sixninja will give the all clear, and we will relay the message on GottaBeMobile.

Should I Jailbreak the iPhone 4S?

Jailbreaking the iPhone 4S voids the Apple warranty and can cause stability issues, which is why some users do not jailbreak the iPhone 4S.