Skulls of The Shogun is a new strategy game from 17 Bit that will work across all Microsoft-branded devices.

The new strategy game is now available on Windows Phone 8, Windows 8, Surface and the Xbox 360, and players can play the same game across every platform. As one of the first Xbox games to come to all Microsoft platforms, Skulls of the Shogun lets Windows Phone gamers play against Xbox and Windows gamers.

In the turn-based strategy game players control an undead army of samurai in a tale of revenge. All versions of the game will follow the same story as the player’s General Akamoto tries to obtain the title of Shogun of the Dead.

The big draw is the asynchronous multiplayer battles which lets gamers take their turn whenever, or wherever they can. Gamers can start the game on an Xbox, and pick up turns on a Windows Phone when they leave the house and finish a game on their Surface or Windows 8 PC when they get back home. It’s just like other turn-based games such as Hero Academy, but it gives players more control over how they can play the game.

Cloud saving means players can also play through the single-player campaign on any device, and pick up where they left off on another device. Gamers don’t have to worry about replaying missions because they want to play the game on a different device. 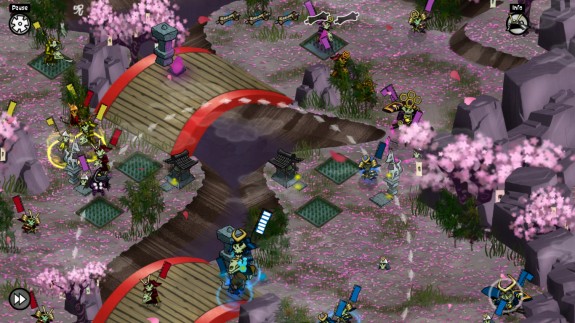 Skulls of the Shogun is the only game that has this sort of cross-platform play so far, but this type of gameplay is the part of the promise of Microsoft extending the Xbox brand to multiple platforms. Not every game will work as well with three different types of input (touch, controller and mouse and keyboard), but there is a chance other developers will find a way to make it work.