Sky Gamblers: Air Supremacy, the flight-sim game that Namco showed off at the new iPad event is now available in the App Store. While Namco showed it working on the new iPad, it will work on any iOS device that supports iOS 5.

To get the most out of the game, Namco says you’ll need a new iPad or an iPhone 4S. While we’re sure the iPhone 4S would play the game well, Sky Gamblers: Air Supremacy seems like it was meant to be played on the iPad’s Retina Display instead.

For $4.99 Sky Gamblers: Air Supremacy will offer up 40 different jet configurations flying a massive “over 40 billion square feet of land and sea.” The total combined areas in the game are four times the size of New York City. 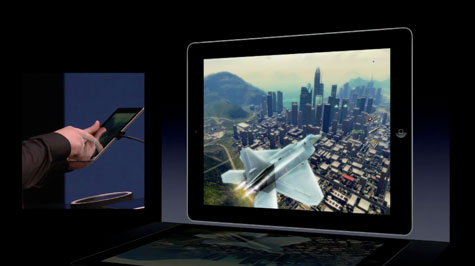 The game has both a single- and multi-player component. Both modes offer Survival, Free For All, Team Deathmatch, Capture the Flag and Defend the Base game types. When playing multiplayer, you have a chat wheel that lets you communicate with your team, assuming you have one.

Namco promises more game types will come soon, in case the ones included aren’t enough for you.

The game looks simply amazing from what we saw at the Apple event, and we can only imagine what it looks like on the new iPad’s screen. If the new iPad’s screen isn’t enough for you, the game supports AirPlay so you can play it on your HDTV through the Apple TV. It might not look as amazing, but if it looks anything like it did in the on-stage preview, it will still look pretty great.

We have Sky Gamblers: Air Supremacy downloading right now, but we’re waiting for the new iPad to start playing.

It’ll only be a few hours now.