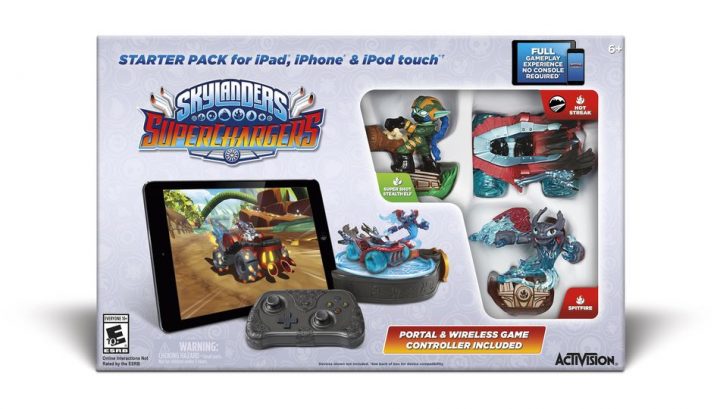 Physical figures for Spit Fire, SuperShot Stealth Elf and Hot Streak are included with every purchase of the Skylanders SuperChargers Starter Pack for iOS and Android. Polygon reports that other characters will be downloadable purchases within the game itself, making it easy for players to grow their collection.

Online retailer Amazon already has Skylanders SuperChargers Starter Pack pre-orders for iPhone, iPad and Android available. The retailer hasn’t yet updated the game’s release date information. Shipping the Starter Pack will be free. Retailer GameStop also has the Starter Pack available for pre-order. Both are $74.99 before any taxes and extra fees are added.

Announced earlier this year, Skylanders SuperChargers is a pretty aggressive update to the classic Skylanders formula. The SuperChargers aren’t actually the vehicles, but the powered-up Skyland dwellers that pilot them. Vehicles purchased for the game can be used by any Skylanders figure, but players get special power-ups and a performance boost when they pair the right SuperCharger with their companion vehicle. There’s air, land and sea combat for players. Even without a SuperCharger vehicles can be upgraded and enhanced with different upgrades for more speed and fire power. Longtime franchise lovers will appreciate the classic ground combat that doesn’t involve a vehicle.

Skylanders SuperChargers is the next major release in the highly popular toys-to-life series of games, but its not the only thing coming. The Skylanders SuperChargers release this year has more competition than there’s even been before. Disney Infinity 3.0, another updated toys-to-life game featuring characters from Star Wars and other Disney-owned franchises, launched last week. Warner Brothers Interactive and toy company Lego have their own entry in the genre coming arriving this month too. Called, Lego Dimensions, it has figures and vehicles, but it focuses on using its portal-like accessory as a puzzle solving mechanic. In fact, Lego Dimensions is more of a puzzle solving experience. As GottaBeMobile found out at this year’s Electronic Entertainment Expo, Skylanders SuperChargers is an action-filled thrill ride.

Read: 12 New Xbox One, Wii U and PS4 Games for September

The Xbox One, Xbox 360, PS3, PS4 Wii U versions of the Skylanders SuperChargers Stater Pack also cost $74.99. Players can purchase new figures and packs to add even more content to every version of the game coming.