Windows Phone owners had an unexpected surprise this weekend as Microsoft-owned VoIP service Skype released its app to users. The app, which was previously in beta, could now be downloaded officially from Windows Phone Marketplace on Windows Phone handsets, such as the Nokia Lumia 900 and the HTC Titan II.

Some new features on the Windows Phone version that were not found in the beta release include: outbound calls to landlines, search and find contacts through the app, and other performance-based improvements. The app takes on the panoramic home screen display found on Windows Phone’s Metro UI. 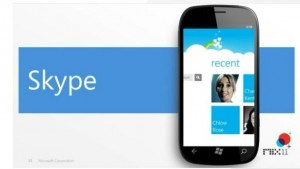 Despite having exited beta, the first official release for Skype for Windows Phone is still lacking a few features that are present on rival Android and iOS platforms, including the ability to receive incoming calls while the app is running in the background. That said, Skype’s utility on Windows Phone in this version will be limited to mainly making outbound calls. It’s unclear if Microsoft intends on supporting background call notifications for Skype in a future release of the VoIP app.

The free app will work over WiFi, 3G, and 4G services.

Another popular video chat app on Windows Phone and one that is pre-loaded on Nokia’s Lumia 900 handset is the Tango app.

According to WP Central, users outside of the U.S. may not see the version 1.0 release of Skype right away in Marketplace. If you don’t see the new app right away, you can check back again later to see if Microsoft updates the regional Marketplace listing.