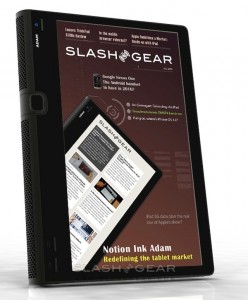 Slashgear got some renders of the Adam tablet from Notion Ink featuring a mockup of a Slashgear digital magazine. Very cool. Also, I didn’t realize the current design (as opposed to the previous flat blimp-looking mockup) was a wedge. A slight wedge to be sure but still better than strictly flat.

They also point out that the Adam should whup the iPad in battery life (2-3 times not counting the display) and will serve up Flash. To counter the iPad’s biggest selling point, a developer challenge is being proposed with over $1M backing it. Looks like they’re taking the competition seriously.

Despite all that, there are still a lot of holes to be filled, not the least of which are release date and pricing. Quite frankly, releasing more renders at this point, after they’ve shown the prototype, isn’t very reassuring. Now is the time for more concrete stuff not abstract.