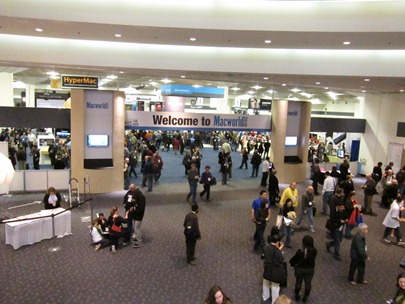 I spent yesterday afternoon at MacWorld Expo 2010 here in San Francisco and was somewhat saddened by what I saw. What used to be a vibrant show has been reduced to little more than a discount-electronics bazaar.

I went to my first MacWorld Expo was about 10 years old and have fond memories of what the show used to be. I remember when exciting products were introduced at the show and being truly amazed when I saw PowerBooks, Zip drives, recordable CDs, Mac clones and Webcams for the first time. In more recent years MacWorld where I’ve seen innovation such as the MacBook Air and Axiotron’s ModBook. MacWorld would take over both halves of the Moscone convention Center in there were always crowds outside. Needless to say, MacWorld Expo was the place to be this time of year if you were a geek in San Francisco.

This year it is a heck of a lot different. The show is sold about a third of the boot space compared to last year and the crowd just isn’t the same. The show organizers claim that about 26,000 attendees have checked in so far, but I take the stats of the green of salt. Keep in mind that the MacWorld Expo is open to the public and it’s pretty easy to get a free pass to the show. It also appears that hundreds, if not thousands, of these attendees are part of organized school field trips. I spotted three busloads of high school kids from Lodi, CA wandering around the show floor. While many of them were clearly enjoying themselves, many of the exhibitors seemed rather annoyed at their presence. They’d much rather be showing their wares to industry buyers, media, analysts or people that intended to buy on the spot.

Speaking of buying on the spot, that’s all some exhibitors seemed intent on doing. This is in stark contrast to the Consumer Electronics Show, where companies are focused on introducing brand-new products to the industry and aren’t allowed to sell their products on the show floor. The worst part of the whole show is that some of the manufacturers are being disingenuous when it comes to selling to the public.

As far tablets go — there’s nothing there. Other World Commuting, the retail partner of Axiotron, isn’t showing the ModBook for the first time in three years. And the iPad is nowhere in sight. The only signs of Apple’s latest product are the various iPad cases strewn about the show floor.

I’m going to be going back to MacWorld 2010 again today and will my best to focus on the positive. On the bright side, smaller companies are getting their turn to shine and not be overshadowed by Apple.