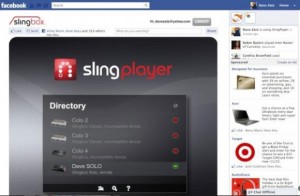 Sling Media’s strategy seems confusing to me at times. If you have a Slingbox you can view video from your TV on a device, in most cases with a SlingPlayer App. Sling has come under fire because they do charge for those Apps and if you want to use them on multiple platforms, you are paying the piper each time. (The Apps are usually priced at $29.99.

Don’t get we wrong, I like using a SlingPlayer and I begrudging pay the freight once I decide I want the App on a device. But lately, Sling Media seems to be moving away from App development and heading to the web. If you’re on a Mac and a Slingbox fan, you’ll already know that Sling Media has stopped (or so they say) development on the App for that platform and they want you to use a browser to view your content. (This may have happened for Windows devices as well, but I don’t know.)

Now, Sling Media is debuting an App for Facebook. And of course we view that through a browser as well. The SlingPlayer for Facebook App was just recently announced and is now available. I haven’t given it a try and probably won’t since I’m not one of those who likes to run Apps through Facebook. You’ll need a SlingBox Pro HD or SlingBox Solo device to use this App.

Again, I’m not complaining here, but it seems to me if Sling Media is going to be giving away it’s technology through a browser, it needs to rethink its strategy regarding pricing the Apps. Or maybe that is just the strategy they are after: free on desktops and laptops and charge for mobile App usage. I’m sure they feel like they need to recoup those costs, but something just isn’t adding up in my pea brain.

Info and pic via SlashGear