Sling TV has been arguably one of the best live TV internet streaming services since being launch last year shortly after its debut at CES 2015. Offering over 23 of the most popular channels for just $20 a month. This year at CES the company announced new channels, a completely new design to the user interface and more.

For those new to Sling TV. It’s an internet-based live TV streaming service that offers over 40 channels in total, including ESPN, HBO, AMC and others, and multiple tiers, starting at $20 a month. Sling TV works on smartphones, tablets, laptops, Smart TVs, Roku, Fire Stick, Chromecast and an array of different devices. Essentially letting users watch TV anywhere and everywhere for just $20 a month.

This live TV service is one of the better options, and a cord-cutters dream TV setup, but the interface could use a little help. Since being released early last year they’ve added tons of content, new channels, and support for more devices. Now that the portfolio is looking strong, Dish looks to improve the user experience and interface. Below is a video showing off some of the new UI changes coming in the next few months.

Earlier today for the CES 2016 annual tradeshow Dish and Sling TV made a few small announcements. For one, they’ll be adding ESPN 3 automatically for all users, as a part of the base “Best of Live TV” package, which is still just $20 a month. Bringing its total channel count to 24. Not to mention all the other add-on packages.

However, the biggest news from the show isn’t one more channel to catch replays of college football and Tennis matches, but an overhaul of the user interface. Sling will be adding more columns that will be smarter, easier to see and manage, a “Sports” tab, and an all-new “My TV” view that will learn from users as they watch TV. 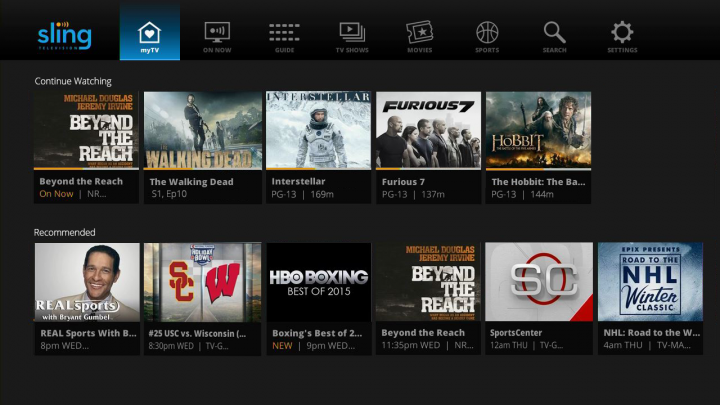 With My TV view, Sling TV will be easier to use, smarter than ever, and focus on delivering content to users rather than a big never-ending list of channels to scroll through. A few months back they improved the guide to offer a fuller view of content, but coming later this quarter will be a complete visual overhaul.

“The My TV view brings the viewer’s favorite content directly to them, rather than requiring them to seek it out. In our minds, if we designed My TV right, the viewer will always find something there to watch.”

The new My TV view won’t have specific content, but will learn from the viewer and list recently viewed content, favorite channels, similar movies and other things. Essentially be easier to use, smarter, and all done automatically.

Sling mentioned a new Favorites option, Continue Watching tab, Recommendations and even a What’s Hot filter. All of which will be ready and waiting in the My TV tab. In our review above we praised everything that Sling has to offer, but the user interface wasn’t the most polished. It looks like the company wants to focus on that in early 2016 and have a big UI update available before the end of March. If so, $20 a month makes this still one of the best options around.