Slither.io is a popular game that upgrades the snake game that many of us played on calculators, early phones and computers and turns it into an online multiplayer version of the game like agar.io.

We’ve updated this with more Slither.io tips and tricks, new Slither.io skins on iPhone, new in app purchases and important details about Slither.io hacks and cheats.

You can download Slither.io for your iPhone, iPad and Android to get in on the fun. Gamers can also play slither.io on the web in a browser.

We’ll walk through the things you need to know about this popular multiplayer snake app from usernames and where to download to tips and tricks to grow and survive in Slither.io.

Check out our best iPhone apps for more fun that you can enjoy when you need to take a break from Slither.io.

The Slither.io game is fun and you have a good chance even when you start out as a small snake.

Slither.io is an online version of Snake. You play against other players online in a shared room with orbs that you need to eat to grow.

You can play Slither.io on iPhone, iPad and Android devices for free. There are ads in the game, but only between rounds. There is also an online version for you browser or computer at Slither.io.

Slither.io is a game with many players, but it comes from humble beginnings and it is still owned by a one man development team unlike many of the top iPhone and Android apps. Steven Howse developed Slither.io and is on a mission to keep the game running with more than 67 million daily players.

With the Slither.io app you can play against others in a more colorful and free-flowing version of Snake.

How to Play Slither.io

The basic premise is to pilot your snake around the map and pick up glowing orbs to grow. Tap on a spot on your screen to change direction, or slide your finger around the screen. You cannot pause Slither.io unless you are playing against AI. 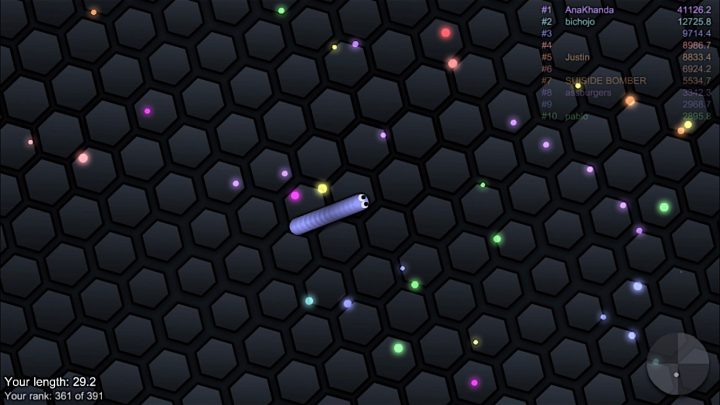 Pick up as many orbs as you can.

If you take out another snake by having them hit you, you can collect glowing orbs that help you grow faster. 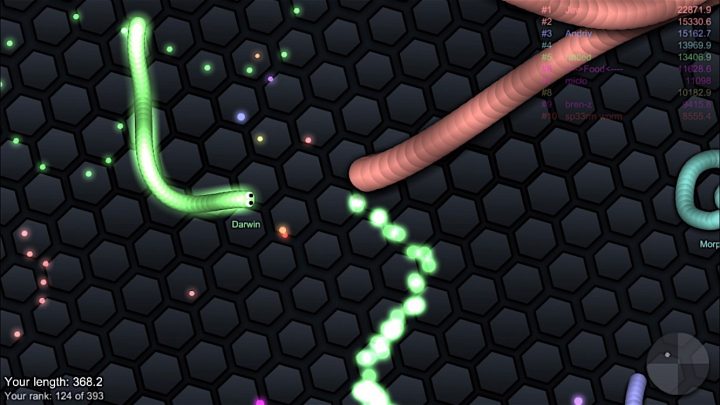 use your speed boost to jump ahead of another snake.

You can double tap on the screen to speed boost. This is helpful for getting in front of a slower snake to take them out. Using this will make you smaller. You can follow a boosting snake to pick up the orbs they drop.

The goal is to grow and grow without hitting another snake. If you are the top snake at the end of the day you can share a victory message.

A popular new video is a reaction video showing Elders Play Slither.io. You can watch, and laugh, as a variety of seniors play Slither.io.

You cannot reserve a Slither.io username to keep as your own forever. When you start a game you will need to choose a name for your snake. After you die someone else could start with that username and if you are in the same world you may not be able to use it.

If you enter any profanity the game will remove it and replace it with a less vulgar version. We didn’t test every word, but it is good at removing common curses.

Slither.io is rated 4+ on iTunes and E for Everyone on Google Play. As we mentioned the game removes many curse words from usernames. While you play online against others there is no text or voice communication so there is no real way to talk to the other players. 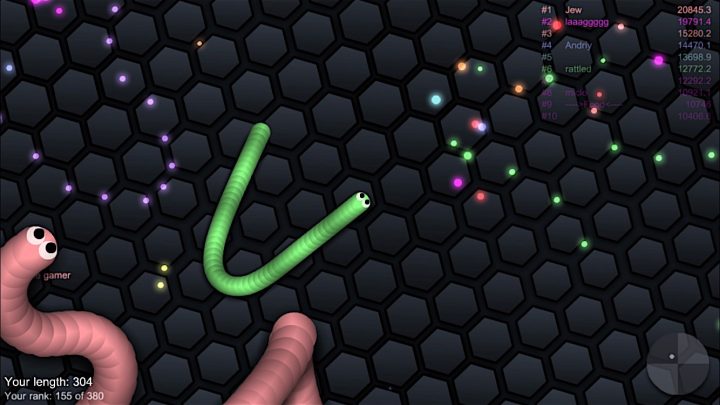 Slither.io is ok for kids, and the adds are also safe.

While playing Slither.io you will see ads. Most of these are for other mobile games and all the ads we’ve seen so far are age appropriate for the rating. The ads only appear in between the games. There are video ads that will prompt you to install another game.

There are now in-app purchases in Slither.io that allow you to remove all ads. This is a one-time purchase of $3.99. You can restore this purchase if you need to on a new iPhone or iPad.

You can now use Slither.io skins that change the color and look of your snake. Originally only on a computer you can now access these in the iPhone app. 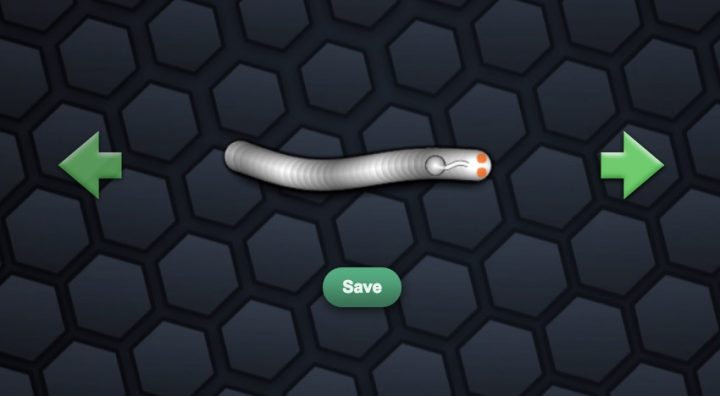 You can only get Slither.io skins online for now.

On iPhone or Android you choose your Slither.io skin from the main screen with no need to share to unlock the feature.

There are a lot of skins you can cycle through including flags, patterns, mascots from websites and much more. 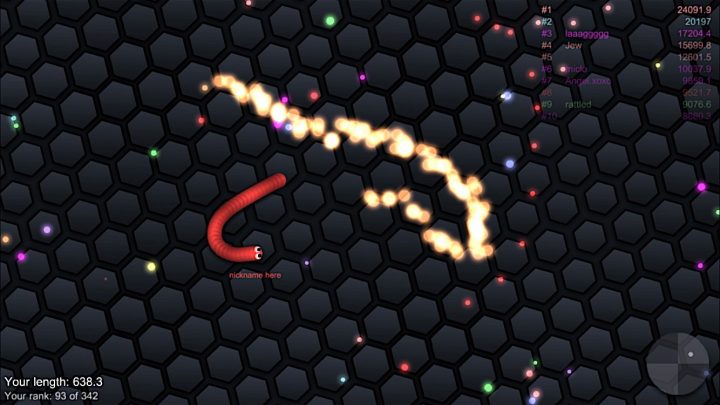 If you try to use these you will see messages like the Slither.io cheat is hacking the system, but then, you’ll need to prove you are a human.

How will you do this you ask? All you need to do is sign up for some free offers and give your information to a company that will spam you and call you non stop. Given the fact that you cannot buy any powerups or virtual currency and these tools claim they can hack the system with any name you enter, it is unlikely that you will find one that works.

Don’t use any Slither.io hack or cheat that asks you to share your personal information or sign up for any service.

You can take out bigger snakes by boosting in front of them. The bigger the snake, the slower it is to react. As soon as you take the snake out grab those orbs to grow.

If you are big enough you should circle around an opponent to kill them. if you do this, cross over yourself and get the orbs before someone else does.

When you are in a tough spot, make a circle and keep your head inside the circle as long as possible. This allows you to stay alive and may even score a big takedown.

While you are playing, look for opportunities to follow a big snake. When they get a kill, swoop in and steal the orbs. If you time this right you can also score a kill since they will likely be distracted by picking up the orbs themselves. 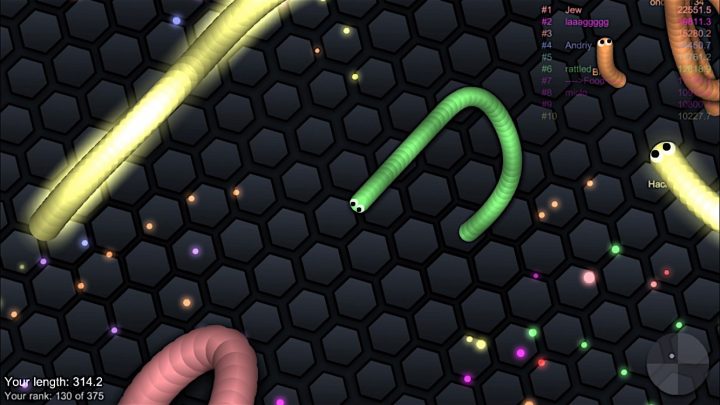 If you experience Slither.io lag, try a different connection.

If you are playing the game and run into Slither.io lag you may need to change your Internet connection. This is a game that you play online, so playing on your cellular connection may sometimes be problematic.

If you are on public WiFi it may also be a problem. Try a different connection to see if that helps. When you use this game on a network with a lot of other traffic it could also cause a slowdown.

You can now play Slither.io agains AI, which may help with some of the lag. While there are a variety of reasons including your own connection, the number of players online can impact your connection. The game’s creator tells The Wall Street Journal that he is spending $15,000 a month to keep the game online and he is working to add servers in areas that need it.