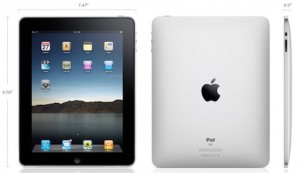 A rumor working its way around the Internets is that Apple is looking into using OLED panels for different-sized iPads. Exciting! Furthermore, those new iPads could arrive as soon as the last quarter of the year. Awesome! And on top of all that, it’s almost impossible that this could happen. Boo!

Apple reportedly plans to launch its second-generation iPad, using 5.6-inch and 7-inch OLED panels, as soon as in the fourth quarter of 2010 with Compal Electronics having a chance to receive the orders, according to sources from component makers.

Very intriguing stuff. Until you realize there’s already an OLED shortage and there’s barely enough to keep up with existing demand from smartphone makers who already use OLED. Some people criticized Apple for sticking with LCD for the iPhone 4, but I don’t see how they could have secured a sufficient supply of OLEDs for the tens of millions of units they’re likely to sell. And that doesn’t include the iPod touch or the larger iPad, which requires around four times the raw material of an iPhone screen. At 5.6- and 7-inches, each OLED for an iPad would eat up 2-3 times the raw materials as an OLED for a 3-inch display. You can’t just whistle that up in the middle of a shortage.

In fairness, Digitimes does mention the shortage and even points out that this deal wouldn’t be very profitable for Compal compared to selling OLEDs to notebook makers. Still, I don’t think the unlikeliness of this rumor is being emphasized strongly enough.