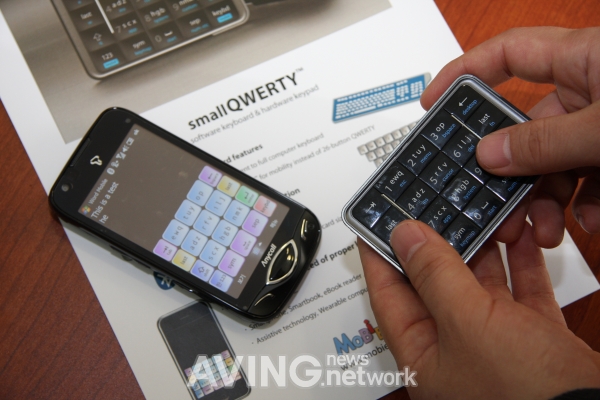 Not at all sure about the specs on this device, but from its appearance, it’s a Bluetooth keyboard sporting the smallQWERTY layout from Mobience. Please note, “smallQWERTY” does not mean a small keyboard using the QWERTY layout. Rather, it uses the standard phone numeric configuration with a modified alphabetic layout based on QWERTY positioning.

Basically, you know how you enter letters on a phone with standard number keypad and have to press the number buttons multiple times to get to a letter? Same concept, except the letters are arranged to make commonly used letters easier to access. Instead of hitting “3” twice to get to “e”, it’s on press on the “1” key.

While it’s not an exact match to the standard QWERTY layout, the letters are near where you expect them to be on QWERTY, so they’re easier to find, justifying the name. Soft versions are available for Android and iPhone if you want to give the arrangement a try. I tried their note-taking app on iPhone and find it just adds clicks vs. the iPhone keyboard, but I think it has merit as an alternate to the standard alphanumeric pad or as a standalone external keyboard for a keyboard-less mobile device.

Via AVING USA by way of OhGizmo!