Smart home is one of the big trends at CES 2015 Las Vegas and one of the more interesting products we’ve seen is the Misfit Bolt smart lightbulb, a device that works with the iPhone or Android to transform any room with its stash of over a million different color combinations.

With so many gadgets being paraded around the showroom floor at CES 2015, it’s hard to stand out. Misfit’s new Bolt smart lightbulb, a gorgeous color-changing bulb, has no problem standing out amongst the crowd. It’s bright, it’s beautiful and it’s one of the more impressive smart home gadgets that we’ve seen here during our week in Las Vegas.

The $50 Bolt smart lamp is a fresh take on the lightbulb and it allows for users to add a little personality to any room of the house. The device comes loaded with over a million color combinations thanks to color mixing technology embedded inside of the bulb. The glass globe at the top then projects that color into the room. Those that don’t wish to brighten up their den with teal or blue can always opt for the standard white.

Misfit’s new product is about as simple as they come. It does not require any kind of a hub and instead, it can be controlled by the Misfit application for iPhone or Android smartphone. The Bolt also screws right into a standard lightbulb socket with no trouble at all. Unsurprisingly, the Bolt smart bulb uses LED technology to ensure that it lives a long, lengthy life. The company says that it can be set up and running in under a minute, similar to a normal lightbulb. 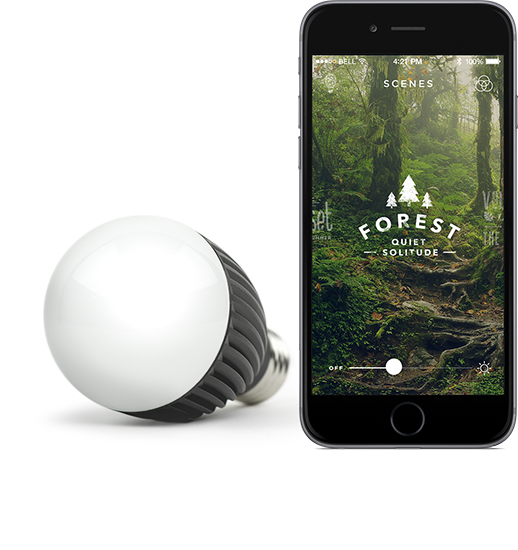 The Bolt is far more expensive than a standard lightbulb though given the technology, that’s to be expected. One Bolt lightbulb will cost $50 though consumers can opt for a package of three for $130 for a bit of a discount. Misfit’s new smart lightbulb isn’t on sale just yet, it’s on track for arrival in February, and we expect to hear more about the release date as we get closer to its expected launch.

Those interested in swapping out the traditional lightbulb for the Bolt can pre-order the device through the company’s website. The Bolt works with existing Misfit devices including the company’s Beddit sleep monitor. Owners of the Beddit will be able to tune the lightbulb to their sleep cycles, just one of the smart features on board the Bolt.