A new iOS 7 concept brings Jony Ive’s rumored vision of a flatter iOS 7 to life, offering the most realistic look of what Apple could show off in June.

The iPhone, iPad and iPod touch all run iOS, a special software for Apple’s mobile devices which looks similar to when it was first introduced with the iPhone in 2007.

Under the direction of Jony Ive we expect a flatter version of iOS that lacks the gloss and real-world design items like stitching that iPhone owners are used to.

Several rumors claim Apple is working double-time on iOS 7 and bringing in help to complete the new software ahead of June 10th. This new look reportedly influences the overall look of iOS 7 and the design of several Apple apps that ship on the iPhone. 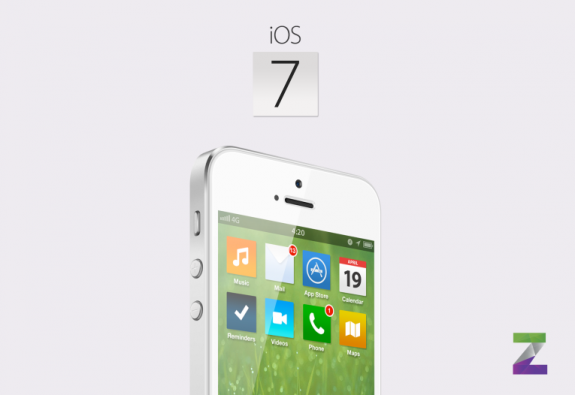 The best look at how iOS 7 could look.

SimplyZesty, a digital agency sat down with the latest iOS 7 rumors to bring them to life what may be the closest we’ll get to seeing iOS 7 before Apple officially announces it.

The iOS 7 video above isn’t directly from Apple, but based on the rumors we’ve heard it could be exactly what Jony Ive is pushing the iOS engineers to deliver. Ive reportedly wants to cut the real-world look out of apps and change the overall user experience. This vision of iOS 7 comes to life here.

In this version of iOS 7, the lock screen flip flops, bringing the time and date to the bottom and pushing the lock slider up top. We also see a new pul up feature that offers access to the camera, Siri and Maps. It’s not clear if this vision includes customizable shortcuts, but that is something Android smartphones offer.

Widgets are a longtime wish from many iPhone users, and in this vision of iOS 7, we get a look at how Apple could deliver widgets and more controls in Notification Center.

This look for iOS 7 features more controls in the Notification Center and widgets that allow users to quickly check information like the weather and calendar items. There is also a music widget with album art and controls. This may not replace the desire for widgets on a home screen, but it could offer a good compromise.

Like many concepts we also see toggles for Wifi, Bluetooth, brightness and Airplane mode. Android phones feature similar controls as part of stock Android and most custom versions do as well.

Finally, we see a new look for the iPhone apps from Apple. We get a closer look at how Calendar, Music and Siri would change in this vision of iOS 7. 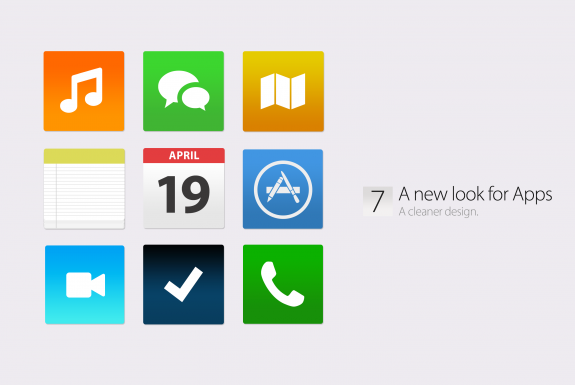 A new look for Apple apps in iOS 7 in this concept.

The new look is flatter and uses swipes to access added controls in Music and a new look for Siri to match the overhaul of iOS 7. We also get a look at several new app icon designs that would match the overall look of a flat iOS 7. The rest of the apps from third-party developers would look out of place next to these new app icons.

We’ll need to wait another month or so to see Apple’s vision of the new iOS, but it could look something like this.