The Apple iPad Smart Cover and the new iPad Smart Case let users fold the case into a two position stand for the iPad.

The Smarter Stand, a Kickstarter project, turns the Smart Case or Smart Cover into a multi-position stand with three more positions.

The Smarter Stand uses a pair of clips that slide onto the edge of the Smart Cover or Smart Case restricting the folds. Add a non-skid pad that adheres to the bottom edge of the iPad so it doesn’t slide as the user places the iPad in the new angles and the Smarter Cover makes the Apple accessory more useful.

Three clips are Included in the package, two for use on the Smart Cover or Case and a backup in case one gets lost. The package also includes a pair of non-skid pads for the bottom of the iPad, in case one gets lost or the user owns two iPads. This keeps the iPad from sliding around while the Smart Cover holds it up in the new 45-degree, 33-degree or a lower privacy angle. explained below. 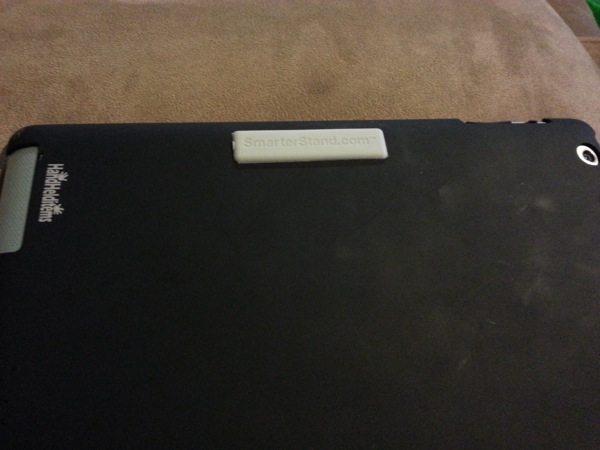 I like the idea of the Smart Stand because sometimes I want to use the iPad at more than the two extreme angles the Smart Case or Cover offers. A 33-degree angle feels great for typing and a 45 degree angle often works better for showing off pictures or video.

Unfortunately, keeping these clips on the Smart Cover all the time gets annoying. They also slip off easily if I’m not careful and I must slide them up or down on the cover’s edge to change the angle. It’s not easy to slide them without popping the Smart Cover off.

When its time to use the iPad in Smart Stand mode, I slide the clip to cover the portion of the iPad Smart Cover that folds. It restricts the cover from folding at that spot thus making that section flat. I can then use the iPad in a 33 or 45 degree angle. Slide to topmost fold to get a lower angle and the middle most fold to get the privacy angle. Slide one side over the top most and the other over the middle fold and the stand holds the iPad at 45 degrees. 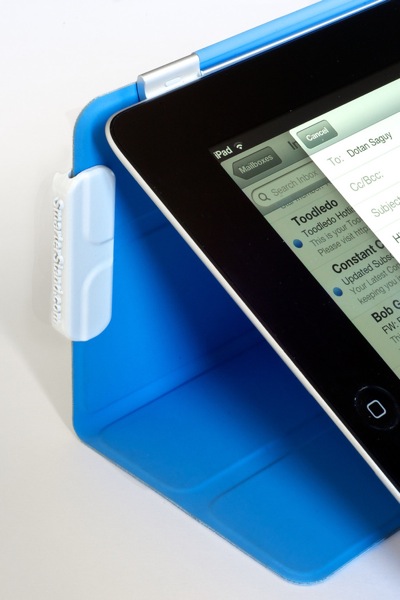 The third privacy option makes the cover to fold so that a portion of the iPad Smart Cover actual juts out above the iPad. It keeps the iPad at a nice angle for typing and people sitting across from the typist won’t see the screen thanks to the case obstructing their view. 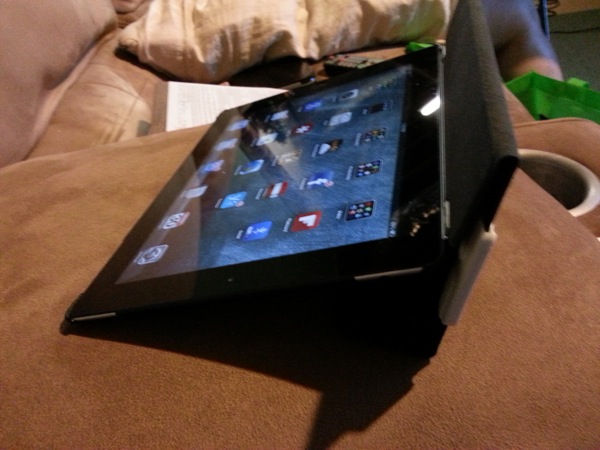 The Smarter Stand privacy option hides the screen from those sitting across from the user.

The included instruction pamphlet explains how to install the clips and the pad perfectly. I wasn’t at all confused. I was, however, unimpressed. The clips annoy me as I carry my iPad and I’m not really a fan of sticking things on my iPad. The non-skid pads come with double stick tape that adheres to the iPad itself. I put it on the back of my back cover because I carry it with theover instead of keeping the back of the iPad naked.

While the Smarter Stand does work, it’s not ideal. The clips get in the way when not in use and if I take them off, then I know I’m likely to lose those little pieces. I also don’t like gluing or taping things on my iPad’s back, which the user must do with the skid proof pad needed to keep the iPad from sliding on slick surfaces when using the Smarter Stand. This is more a personal preference than a problem with the Smarter Stand’s functionality.

Users who need more angles, and can deal with these complaints can back the Smarter Stand before it closes on August 13th.

The lowest options are sold out already. The cheapest backing option costs $12 for a white set. A colored set costs $14. When the Smarter Stand sells at retail, they will go for $20 each.