Over the weekend, there was a bit of drama that took place at a Microsoft Store in Santa Clara.  Sahas Katta from Scatter Tech headed down with his Samsung Galaxy Nexus to give the “Take the $1,000 Windows Phone Challenge” a go. This is a new challenge that derived from the “Smoked by Windows Phone” challenge that popped up at CES 2012.  The original challenge gave users a chance to win $100 cash if you could beat  Ben Rudolph, a Microsoft employee in a simple challenge. The challenges range from taking and uploading a photo to Facebook to posting a status update to Facebook and Twitter. The promotion went over well and went viral and turned out becoming a full fledge ad campaign.

Microsoft recently bumped up the states and started offering a $1,000 custom PC if you win and a free Windows Phone if you lose. These challenges are taking place in Microsoft Stores around the US.

You could win a Hunger Games Special Edition PC, valued at over $1000. And even if you lose, you still win, because we’ll give you a free Windows Phone.* 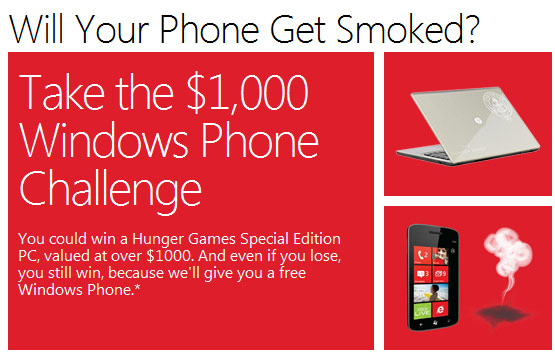 I excitedly thought I won out of pure luck. However, I was quickly told that I lost. I asked for a reason and was told Windows Phone won because “it displays the weather right there.” That was rather unclear. I showed her my device which also was showing off the same information with two side-by-side weather widgets on the center home screen. After pressing for a better reason, I was told that Windows Phone won “just because.”

After trying to push for a real answer since I clearly won the contest by their rules, another Microsoft Store employee (possibly a manger) came by after noticing me asking more questions. Thinking on his feet, he quickly gave a ridiculous out-of-thin-air reason that I need to display the weather of different cities in different states and that “my phone could not do that”.

1st off, this story also points out a bit of precooking, or cheating by Microsoft. The way Sahas should have won by having widgets showing the weather prior to arrival is the same way Microsoft planned to win that challenge… by having tiles prepinned prior to the challenge.

I’ve had a feeling something like this would show up soon or later. I had thought about taking my HTC Titan and putting it up against my Galaxy Nexus in a series of tests of my own but never got around to it.

One of the problems I have with the challenge is that they cater to Windows Phone’s strengths.

Take the fact that the home team (Microsoft) chooses the task and the Microsoft contestant has most likely been trained to maneuver the tasks for the challenge, it’s really not a fair fight either way. In watching all the videos from CES and more recent events, Ben the PC Guy is getting the tasks done before the competitor even formulates the path to accomplish the task on their phone.

I will be honest, I do love seeing these videos and like to see Windows Phone do well, but I want to see it on a level playing field. The positive attention that Microsoft has gotten with these challenges seems to be well received online and absolutely helps Windows Phone’s awareness. Incidents like this are going to set it back some though.