After having transformed the ordinary household thermostat into a simple to use and technological beauty, Nest is back at it again in the attempt to revolutionize the lowly, but necessary, smoke detector with the Nest Protect. The device has recently begun to ship, and reviewers are giving the Protect some great scores, with the biggest complaint against the product being its steep $129 price tag.

Nest Protect is a two-in-one product that combines an ordinary smoke detector with a a carbon monoxide alarm. The easy to use device–you can shut off false alarms with some quick arm motions rather than trying to fan it with a towel or jumping on a chair or ladder to disable it–and it connects to your Nest home network so if smoke is detected in the kitchen, you can also be notified via the Nest in your bedroom and also through push notifications and mobile alerts on the iOS app. 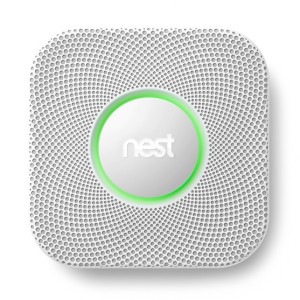 Designed by Tony Fadell, the father of the iPod, USA Today reviewer Edward Baig says that the “Nest Protect alarm smokes the competition,” highlighting that it first warns of danger with a “polite voice” saying “Heads up, there’s smoke in the entryway” prior to firing off a more urgent alarm.

Nuissance with a smoke detector–shrilling false alarms, annoying beeps when the battery goes low–are a major reason that 73 percent of people disconnect their smoke detectors. While these false alarms are annoying, it’s best to be safe than sorry, and Nest Protect makes it easier to be safe so you won’t have to even imagine the alternative.

On his personal blog, former New York Times reviewer David Pogue highlights how the Nest Protect communicate wirelessly with each other, if you have multiple units around the house:

The Protect smoke alarms are all connected wirelessly. They talk to each other (even if you don’t have a home WiFi network, thanks to a proprietary Nest-to-Nest network called Nest Weave). So if you’re in the bedroom, you’ll be alerted to smoke in the basement, or whatever.

Now, you can’t shut up an alert from a different room. You have to wave at the one that’s actually sensing the smoke, which is very smart. You’re forced to go see what the problem is.

There is also, of course, an app for that. When there’s a heads-up or an emergency at home, your iPhone or Android phone gets alerted. Wherever you happen to be, you get notified immediately that something Bad might be happening at home.

And by being connected, you won’t get those annoying beeps with a low battery. A central ring with a glowing LED light alerts you when the battery is low, and the LED light can also light up to serve as a night light as well.

And in her review for CNET, Lindsey Turrentine says that the Protect is the best smoke detector out there, noting that it is “the smoke/CO detector we never knew we wanted.”