Skype, Microsoft’s instant messaging and communication service has given potential Xbox One buyers one big reason to choose the more expensive Xbox One that includes the Kinect 2 sensor: multitasking.

Skype announced the upgraded Skype for Xbox One app in a post on its own blog earlier today.

To be clear, this multitasking doesn’t take the same form as what users have available to them on a smartphone, tablet or Windows devices. That is, no Xbox One app can run in the background entirely. Instead, this new Skype for Xbox One update allows users to Snap the Skype app to the side of their screen. There they can continue phone calls to landline or mobile users if they’ve paid for Skype Premium or are calling another Skype user directly. 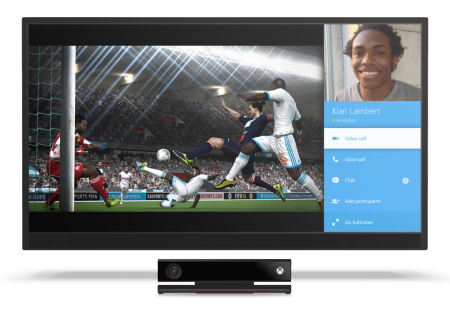 Thanks to this new app update Skype users can place video calls and snap them to their screen as well. Users can add more friends to their Skype voice or video call and text message users too, all without having to dive back into the full screen Skype experience and ruin whatever else they’re doing.

It may sound like a small update, but this feature addition opens up a whole new world fox Xbox One users. A previous version of the Netflix app allowed Xbox 360 users to voice chat and watch movies with their friends and family in separate places. With this latest update to Skype, users should be able to recreate the experience, though they’ll have to be sure to start movies on both consoles at the same time. Additionally, users could play games against each other while video chatting with their friends to make the experience more personal.

There are other benefits besides gaming here too. Users could work out together using Xbox Fitness, the exercise app that’s available to all Xbox Live Gold users. Xbox One owners could also use the version of Internet Explorer that’s available on the console to look up phone numbers, or browse their contacts online, then call that contact using the Skype app that is snapped to their screen.

When it originally shared its vision, Microsoft made it clear that its Xbox One entertainment console would act both as a gateway to the company’s various services and as a way for users to get a comfortable computing experience in their living room.  Of course, last week’s announcement that they would introduce a $399 Xbox One sort of tarnished that image, forcing users to truly ask themselves whether purchasing a $499 Xbox One bundle with Kinect was a sound decision. This new feature could convince gamers that the extra $100 is worth it. At the very least, users who aren’t inclined to purchase an Xbox One with Kinect 2 will consider this a reason to buy the Kinect 2 separately when it debuts on store shelves on its own sometime later this year.

Giving users a reason to buy a Kinect sensor or the $499 Xbox One bundle is key if Microsoft hopes to convince developers that creating games for the Kinect sensor is worth the expense. To date, there are only a hand full of games made specifically for the Kinect 2 sensor. Of those, only Kinect Sports Rivals is considered actually worth purchasing.

Like all Xbox One apps, users who have an Xbox One with lower power mode enabled should find this update is already available on their console the next time they turn it on. The update will be marked by a red dot in the right corner of the app’s icon in the My Games and Apps Screen. Users who have low power mode turned off will need to open the app and manually update it.

Multitasking on the Xbox One is best handled by using the Kinect 2 sensor’s voice commands. “Simply say “Xbox, Snap Skype” to open Skype while continuing to play a game or browse the internet.