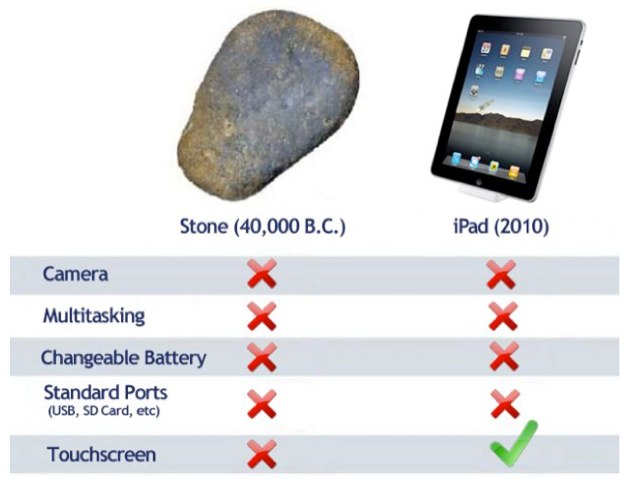 A snowstorm that wasn’t supposed to hit our area that hard, hit us harder than expected. With the unusually cold weather in our area it created quite a bit of havoc.  We had to cancel two performances of The Buddy Holly Story at Wayside Theatre today.  After dealing with disgruntled customers and getting our response organized, I find myself with some time to continue my musing about this week’s other storm, the iPad announcement. Below are some random thoughts on things that I’m continuing to read about in my own discovery.

Buy it or no. This device isn’t even fully revealed yet (just watch, we’ll see two important new pieces of information this coming week) and already we have a “love it or leave it” atmosphere brewing that gets translated to “I’m buying” or “I’m not buying.” Quite honestly, I’m not sure I’d listen to either camp at this point as there is still quite a bit left to learn. Am I buying? Probably just so I can do my job here and keep up with what is going on. But I’m not typical. Like it or not, the iPad will change things, and like the iPhone before it, I’m guessing the next generation is going to be the most important, if not the third generation. Heck, the iPad changed things before it was even an official product.

Multi-Tasking. A lot is being said about the lack of multi-tasking. I’m disappointed in the fact that it apparently isn’t a part of the deal, but when I look at my iPhone usage, I’m so sure it would affect me negatively. I don’t fall into the camp that many who are loudly complaining about this seem to, (not being able to run Pandora when doing something else.) That’s just me. Others obviously feel differently. I’m still not sure what Apple is trying to do here on the iPad and the iPhone by not allowing multi-tasking and it is puzzling that a dark age concept is hanging on with a “revolutionary product.”

To 3G or Not To 3G. I still think the $130 price differential between 3G equipped iPads and non 3G equipped is a way to keep people off AT&T’s network. After stating that earlier I’ve heard from several sources that 3G usually adds around $100 to the cost of a device. OK, fine. $130 just seems steep to me and I think it is purposefully so and I don’t think that means any kind of reverse subsidy. On the other side of that coin I think the maxim “WiFi is everywhere” can now be retired. Sure it is everywhere, you can pick up WiFi signals on most Interstates easier than you can hold an AT&T 3G signal. But they are all locked down. Might as well be another star in the sky. This isn’t a Hamlet-like paradox for me, thanks to the Sprint MiFi card. It’s as limited as any other unlimited offering (5GB) and works well. It also tricks some of those Apps that only work on WiFi into working. I’m sure many will be thinking hard over this issue though.

The Unlimited 3G Lie. This is going to be a bit of a cruel rant. Steve Jobs should have to give back his donated liver for standing on stage and promoting unlimited 3G given that there isn’t a carrier in the US that offers anything close to what the word unlimited means. I’m tired of the deceptive practices and wish someone who had the time and the money would smack all of the idiots who continue to perpetuate this lie with a class action suit that wouldn’t go away. The hypocrisy on this is unimaginably becoming accepted, and I think anyone who willingly accepts it by calling a 5GB cap “unlimited” is doing everyone a huge disservice, including their own credibility. John Edwards is in great company here. I think when I send in my next AT&T payment I’m going to just write “unlimited” in the amount and then tell them it means $1.00. /stop rant.

The Micro-SIM chip. Lots of back and forth on this issue, but I’m coming down with the camp that believes this is a way for AT&T to make sure their iPhone customers can’t use their existing iPhone SIMs in the device. A new form of lock down as “unlocked” continues to join “unlimited” as words that mean nothing.

eBook Wars. This is beginning to play out about like I expected and it is only going to get uglier. Consumers and authors will get caught in the middle (you don’t really think the authors are going to see increased royalties from increased prices do you?) The content owners are fighting back and the iPad is their first big weapon. The other big front on this issue is going to be over DRM. Those who use the Amazon Kindle platform have some portability of their content now that I don’t think they will give up. But if iBooks are tied to the iPad/iPhone platform in the way music used to be (and sometimes still is) Amazon will have a selling point to trumpet.

Digital Note Taking. No, the iPad isn’t intended to be a digital note taking device. That said, there have been iPhone apps that try to offer an Inking experience. I’ve tried quite a few and they all come up lacking compared to what you can get on a real Tablet PC. (The same can be said of the experience on most touch devices, even those that earn the title of Tablet PCs.) Face it the pen/stylus/Inking concept is a niche within a niche, and I’ve written reams about that. But back to those Inking apps. I’m wondering if any of them will find a better solution on the larger iPad screen with the use of something like a Pogo Stylus? Don’t get me wrong, I don’t see that as ever approaching the Digital Inking goodness of a Tablet PC, but for quick note taking in my rehearsal/meeting environment, it is conceivable to me that it might be enough. I have my doubts, but it is conceivable. Although I don’t expect to see any of these apps on a demo unit in an Apple Store, you can bet that when I make the journey to try out an iPad, I’ll have a Pogo Stylus with me just in case. Apple might just be wise to load one of these apps up on those demo units.

Flash: I’m in the kill off Flash camp and hope Apple succeeds in leading that charge. Do I miss it when I hit a site on my iPhone and can’t pull up content? Yes. But that happens rarely. Lots of talk using Hulu as an example of why Flash is important. C’mon people, do you think Apple (and its possible media partners) want Hulu on the iPad? No way.

Camera. This one is a real puzzler to me. We’re seeing reports now that those who are looking at the SDK are finding references to a camera but there is not a camera available. Maybe I’m crazy, but I think this rules out a myriad of applications (at least with the first gen iPad) that seem like naturals for the iPad. These include not only the photo apps, but augmented reality apps as well. Motion Computing is probably laughing at all of the talk about the iPad having a future in the medical vertical market as their research has proven that cameras play an integral part in the acceptance and use of their C5 Tablets. All of that said, this is a real puzzler to me still.

Stall Surfing. Steve Jobs’ protestations to the contrary, I think he’s created the perfect Stall Surfing device. No one wants to sell it that way or talk about it in public that much, but they could have just as easily had a toilet seat on that stage as a couch.

Battery Life and Processor. I need to learn more here. Apple is using its own version of an ARM processor called the A4, that I believe is made by Samsung. You know that they obsessed about battery life, and as Steve Jobs says, the screen is what makes the difference there. (Just ask the folks at Pixel Qi.) But those claims of 10 hours and then 140 of continual music playback baffle me. If nothing else this is one of the chief reasons why I think the iPad is a “wait and see device.”

Open vs. Closed. There’s been lots of talk about this and I think the jury has already reported. Apple sees the future not only in its own way of doing things, but is moving to more and more of a closed system. I don’t have an objection to that as long as everyone understands the game. That’s to Apple’s benefit. Most don’t pay attention until it’s too late. Bottom line is it’s Apple’s game and you get to choose between playing that game, or playing someone else’s. Bemoaning the fact isn’t Apple’s issue, it’s yours.

Photo via Techcrunch and the guy who created it, Phil Santoro