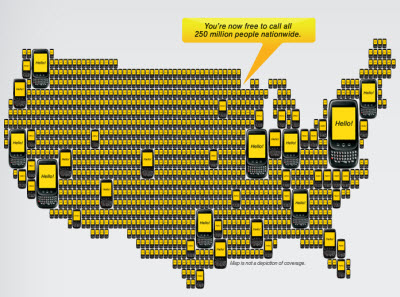 My wife dropped her phone the other day and it met an untimely end. Fortunately I pay for insurance on her phone. Not that she drops them often, but she’s hard on gadgets. So we headed to the Sprint Store to get a replacement. That part of the plan went off without a hitch. Phone swapped out. All is good. But while we were waiting for Sprint’s computers to process the information I got into a conversation with the manager of the store.

I asked the manager when he expected our area to get 4G service. That’s Sprint’s big push now, as it will be with all the major carriers soon. We’re in a small rural market. It took what seemed like forever for Sprint, AT&T, and Verizon to achieve 3G here and I certainly wasn’t expecting an answer that pointed to anytime soon. In fact I expected an evasive answer. I wasn’t prepared for this answer. The manager told me that last he was told our area wouldn’t be seeing 4G ever. “Ever?”, I repeated. “Ever,” he repeated.

I prodded a bit further and there wasn’t much more forthcoming. I asked if that made it hard to sell plans that offered 4G or the Sprint Overdrive. The answer was yes. So on returning home I decided to check into things a bit further. I called Sprint and asked them the same question. There I got a different answer but not one that is more comforting. I was told that they didn’t have any information that they could share on that. That was actually the answer I actually expected at the Sprint Store.

Perhaps this manager was just tired of answering questions about why you have to pay an extra $10 a month for 4G service on the EVO when we don’t have that service here. Perhaps the manager knows more about what’s happening or less. But it must be hard to pushing phones and plans when you know that Sprint’s big marketing push is a distant or non-existent reality for your service area.