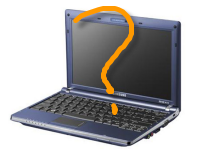 OK, we’ve got a rare opportunity coming up here to solve one of the deepest, most profound, most critical, most divisive, most contentious, (and if you can’t read the previous list of as hyperbole and irony then move on) issues facing the mobile computing world today.

First the issue: What are we going to call Netbooks? We’ve chronicled the legal kookiness brought about by Psion Teklogix’s attempts to protect their trademark (some cash attempts to cash in). Some see this as a big deal, some as just a kerfluffle. James Kendrick says we should all just start using another name and I largely agree. Although I think this cat is well out of the bag, the horse has left the barn, the dog has long since ceased barking, or pick whatever animal metaphor you want to use to describe the fact that the term Netbook is already well entrenched.

So, here’s the opportunity. Somewhere between the Nevada desert and the Las Vegas strip we’ll see most of the mobile bloggeratti gathering beginning tomorrow at CES 2009. Many of them will be hanging out at CtrStg. Many also will be gathering for the annual Tablet PC and Touch Community Meetup, also to be held at CtrStg. So, here’s my thoughts, take them or leave them.

I’m sure we’ll all be talking about this issue with each other, vendors, OEMs, and the like in the immediate days ahead. So, as we gather on Saturday, January 10, 2009, let’s poll those in attendance and those who want to contribute to the discussion virtually, and walk away (or is that stagger away) from CES 2009 with a term we’ll all use going forward. Some may see this as nonsense. Fine. Don’t participate. But for those who will be present it gives us a shot to figure out what we are all going to code in as an ActiveWord to replace Netbook in the days, weeks, months, and years, ahead. Or at least until the next lawsuit comes along.

So, if you are not heading to Vegas and you want to participate, leave a comment here and let us know what your preference is for renaming Netbooks. We’ll take a look at them at the Meetup and see what you’re saying. If the WiFi is working we’ll try to do some polling as well. There’s no guarantee that  a community as diverse as this one is will come up with any kind of consensus, but, hey, what do we have to loose?