So my Father-in-law Walks Into an Apple Store... 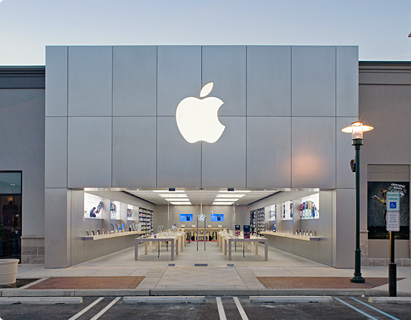 For the past four years we’ve struggled to get my in-laws set up with video conferencing and media sharing. They live in a very small town in Pennsylvania, while three of their kids are in California and a fourth is in Illinois, which means they miss out on quite a bit. I can’t count the number of times we’ve tried to show them how to access various media sharing sites and use Skype. We’d given them computers, webcams, tutorials, etc. over the years and they still struggled. The other night was the last straw.

On Tuesday night my wife and I shared a video with several family members via Dropbox. Everyone else was able to view it on their various devices, but my wife’s parents just couldn’t get it to play. The phone rang and my in-laws complained to my wife about the video not working. According to my mother in law, clicking on the video link made caused a small box to pop up for a split second and disappear. The video wouldn’t play in their PC’s browser and it apparently was nowhere to be found on the desktop. I’m just about 100% sure they weren’t doing something right or were getting an error message pop-up, and I’m sure I could’ve walked them through the problem, but I refused to take the phone from my wife. I told her instead to tell her parents to go to an Apple store and get an iPhone if they wanted to chat or see any more photos or videos of their kids. And that I’d pay for the damn thing if it meant that I wouldn’t have to talk my father in law through messing with browser preferences, updating Quicktime, etc.

My mother-in-law overheard me raising my voice and told my wife I sounded angry and rude. I was. Despite having a computer engineer for a son and myself as a son in law, they still struggle with what a lot of us consider the most basic computing tasks. I wasn’t angry at my wife’s parents, I was more angry at the fact that  consumer technology, which I generally love, is still much too complicated for a large segment of the population. Products and services may seem intuitive to younger generations, or geeks that think about tech everyday, but inexperienced users and older generations still face major frustration points for a number of reasons. My comments in the background of the call didn’t seem to be received that well as the call ended abruptly and we didn’t hear back from them.

But then last night my wife’s iPhone 4 rang with a Facetime call from her dad’s number. She quickly answered and on the other end were her parents sitting in their dining room, 3,000 miles away.  Both had big smiles and it was the first ‘facetime’ they’d had with us since they visited back in June.

Apparently, my father-in-law took my threat/offer seriously. He visited Apple.com to find the nearest Apple Store, which was about 15 miles away in Fullerton, PA. He arrived right around opening and told the Apple rep what he was interested in doing with an iPhone. My father-in-law spent over three hours at the Apple store. That sounds like a long time, but he wasn’t dealing with any problems. Instead, he was getting help…lots of it. After telling the Apple rep that this was his first iDevice, he was treated to an extended setup and tutorial session. The rep taught him how to use visual voice mail, make calls, take photos, check his email, buy apps, browse the web and place Facetime calls. The rep invited him back for iPhone classes and made sure his email account was set up properly.

What a difference a day makes. The in-laws that were handcuffed by computer problems for years are now free to perform many of the tasks that matter to them.

Apple’s combination of easy to use devices and best-in-class customer support are the reason why my friends and relatives (aged 4 to 88) are buying more and more iGear. The vast majority of them couldn’t tell you a thing about their devices’ specs, but almost all of them rave about these devices.  Apple  doesn’t offer a lot of options and its products aren’t perfect. But who cares? They sell their devices at a premium compared to the competition, but this is a price many are willing to pay in exchange for simplicity and service. These same customers are also willing to pay for simplicity when it comes to downloading content, such as movies, music and apps. Geeks might transcode DVDs or find Torrents, but the average consumer is never going to do that. They’d rather let Apple ring their digital cash register to avoid the headaches.

It’s the focus on simplicity and service will likely make my father-in-law a repeat Apple customer. He’s much more likely to buy an Apple TV than have to go through the hassle of learning how to hook up a laptop to his TV to watch online videos and Netflix on the big screen.

As I mentioned before, Apple’s products are far from perfect, but that’s better than the alternative. Take for example, a recent media briefing with AMD. They were demonstrating how a dad could edit an HD movie on his home-office desktop and stream it to the family’s HDTV in the living room. All that was needed was a second desktop (HTPC), a gyroscopic mouse that would control the host PC in the home office, and a spool of cable. The AMD rep was excited that you could access both streaming content and all the content from the home-office PC for just a few hundred bucks, plus the cost of a desktop for a living room. I told him that in the real world nobody would do that. He got kinda upset and insisted there were lots of ‘digital dads’ that would in fact run a setup like this since you could buy everything you needed from Best Buy. Apple’s answer to this solution? A $99 box that does much of the same thing.

In general, people want to enjoy technology, not tinker with it. PC and mobile phone manufacturers need to take Apple’s lead and do more to simplify everything about their consumer products. They should also invest much more heavily in consumer training. Right now, the only in-person interaction most consumers have with HP, Dell, Toshiba, etc. are when they purchase a product and when they return it because it’s ‘broken.’ It’s time that they start aiming to acquire raving fans rather than just move units.