With all the back and forth on whether the HP Slate/Hurricane/PalmPad/Slate 500 is dead or not, the device seems to have taken on mythic status, despite the fact it’s a demonstrated device with defined specs. There should be no question as to whether it exists. The only questions are if (or when) it will ship, and what the hell happened? 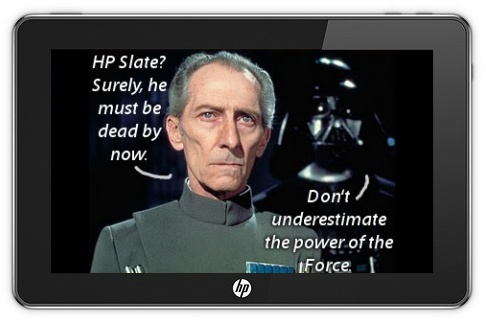 CTO Phil McKinney stated on record regarding the Slate that they “have had this road map for five years, and [they] are sticking with it.” That was tough talk against the threat of the iPad, but then HP bought Palm and suddenly he couldn’t talk about the Slate until the Palm deal was finalized. Obviously that road map was a little more open to detour than he implied.

I understand HP buying Palm and getting all their technology opened a new realm of possibilities for them. However, the listed HP Slate hardware cannot work as-is with WebOS. Radical changes would be required to make them compatible. A WebOS tablet would need to be an entirely different device, and they just bought a whole company that could work on it. The Palm deal really should not have affected the Slate as McKinney implied, and it looks like it didn’t.

If we believe the catalog listings, it’s like the past few months of rumors and confirmed reports alike never happened. No OS switch, no name change, no impact from the Palm deal. Well, almost no impact. By going dead silent these past few months, HP put a real damper on the momentum they’d been building with a debut at CES and their slick online promotional videos. Even now, there’s been no official announcement from HP about the project, except a brief quote on Engadget that notes they “will make a determination soon on the next steps.” That’s not reassuring.

My theory, based solely on observation and no insider knowledge, is that HP was stunned by the unprecedented popularity of the iPad and determined that actively positioning the Slate as a head-to-head competitor was a losing proposition in terms of sales. How ever superior the device, it’s still a Tablet PC, a form factor whose annual sales are less than the iPad’s quarterly sales. At the same time, they’d already devoted the resources to making the device and can’t afford to back out. Thus, it seems they’re releasing it quietly and without fanfare.

HP has an audience with their Touchsmart line and already offers the best deal on a Tablet PC. The Slate will fit right in and can easily be a relative success, “relative” being the operative word. Moving half a million units in the first year would be a great success story, but not in comparison to the iPad’s multi-millions. Reeling in expectations to reasonable levels may seem a timid move, but when the cold hand of reality smacks you in the face, it’s often the only move.