I’ve seen the question in the headline of this post bouncing around quite a bit. How much memory is optimal for running Vista? The oft repeated assumption is that the more the merrier and I can’t disagree with that. But what is the sweet spot? What is that combination of silicon that combined with your system keeps it purring along nice and smoothly?

I’ve got 2gigs on the Lenovo Thinkpad X60 and it has seemed to fill my needs quite well. But I thought I’d check out how that 2gigs compares to the 1gig I have on the Toshiba M200. Now granted the two devices are drastically different. The X60 is ready to run Vista, the Toshiba isn’t and performs ok with Vista but not great. It isn’t running Aero Glass by any means. The X60 also uses integrated graphics and the Toshiba has a dedicated graphics solution. So I doubt if this is any ways definitive, but the testing I’ve run certainly uncovered some interesting results. At least for me.

For testing purposes I installed a nifty little SideBar gadget called Multi-Meter that indicates memory and CPU usage. (You can get it here.) For my purposes I was most interested in seeing how much memory a full work load used, but I also found it interesting to watch how the two processors on this Dual Core device are used by the system.

This week has been particularly busy and for most of my work day I’ve had the following loaded on the X60 at all times: Firefox, Outlook 2007, Word 2007, Excel 2007, Publisher 2007, OneNote 2007, Blogjet, and Windows Live Messenger. For this test I also added Windows Media Player to the mix. (As a side note, I would never have dreamed of running that much of a load concurrently on the Toshiba M200.) For testing purposes I had the same load of running applications on the Toshiba M200. Both Tablet PCs have essentially the same applications and services running after start up though the Lenovo has considerably more resources allocated to Lenovo specific system utilities. 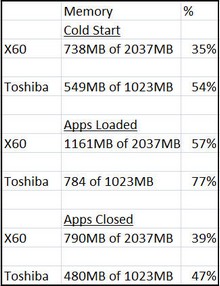 No real sunrises there when you think about it. After closing all of the applications on each machine I’d see the following: The X60 would return to a state where it was using 790MB of 2037MB or 39% and the Toshiba would return to a state using 480MB of 1023MB or 47%. Interesting that with the Toshiba more memory was freed up after running and closing the applications than on the X60.

Of course with only 1Gig of memory there is considerably more being swapped out to disk than there is with 2Gigs of memory. Which of course highlights the importance of having a hard drive with a good rpm speed if you are going to limit yourself, or be limited, to the amount of memory on your device. While I don’t use the Toshiba M200 for much these days, when I do pick it up, I’m consistently surprised with its performance as compared to what others talk about on their M200s and I suspect one reason may be that I have a 7200rpm hard drive installed on that machine.

So what’s that sweet spot? As with most things it depends on what you are doing and mileage definitely will vary from user to user. The application load I listed above is about as heavy as it gets for me and in cases similar I would say that 2Gigs would seem more than sufficient. Will 1Gig suffice? In my opinion, it depends a lot on the speed of your hard drive, or whether or not ReadyBoost is an option for your device, as well as how much you multi-task and with how many applications.