The Samsung Galaxy S II will outsell the Motorola Droid Bionic according to a study of almost 15,000 social media users.

The survey examined social media interaction on Facebook, Twitter and other social networks Mashwork compiled the following data which points to an 11% increase in interest of the Galaxy S II over the Droid Bionic from April 1 to June 21st of this year. 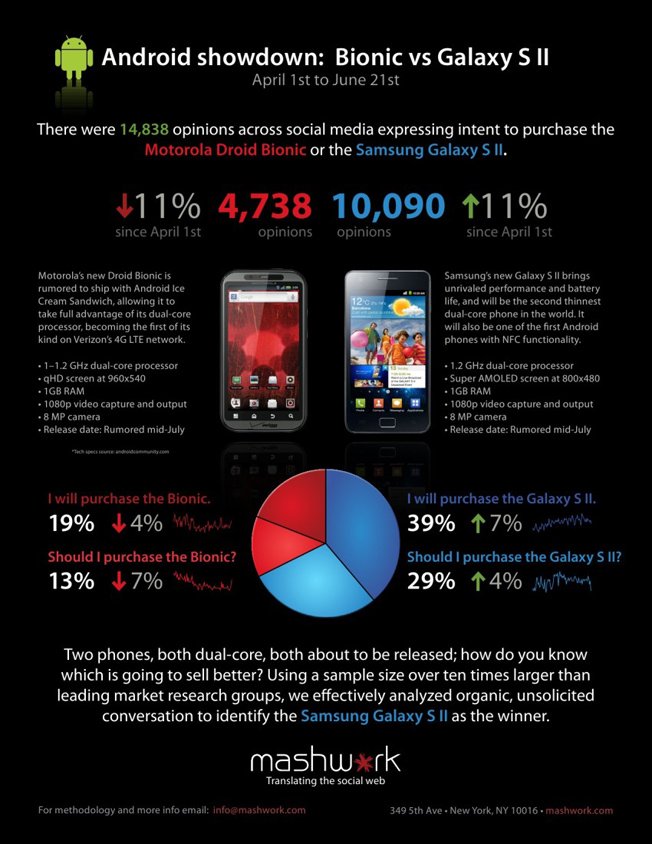 It’s not uncommon for companies to perform research and analysis based on what users say they will or won’t purchase online, but frankly if you believe everything you read on Facebook and Twitter about what people want to or plan to buy, you need to have your head examined.

Why are we skeptical about this type of unsolicited data collection and conclusion drawing? It all boils down to the fact that when a new device comes out, or when a user learns about a new device, it is fairly common to say that they will purchase the phone. It also doesn’t hurt that the Galaxy S II will arrive on several carriers instead of a single carrier, which can account for a lot more users asking if they should get it, but not necessarily turning into purchases.

We’ve all seen tweets that say, “The Galaxy S II will be my next phone!” on Twitter, but when you meet the person 3 months later they picked up an iPhone or the most recent Android device.

Simply put, social media may deliver some interesting data, but we can’t always trust social media users to put their money where their tweets are.

I’m guilty of this all the time. At least once a month I’ll express my desire top purchase a new smartphone, gadget, app or notebook — but by the time I am looking for a new phone or gadget the old one I mentioned last month has faded from memory.