Just in time for the London 2012 Summer Olympics, SoFit is launching its mobile app to make fitness more social and fun. According to the company, the app “revolutionizes fitness through social connections, rewards and charitable donations.” The free app is now available in the iPhone App Store as well as Google’s Android Play Store.

“People all over the world are able to be part of the Olympic spirit with the SoFit App and make change in their communities by virtually partnering with people in different countries and walking miles together to encourage tolerance,” said Marc Askenasi, President and CEO, Founder of SoFit. 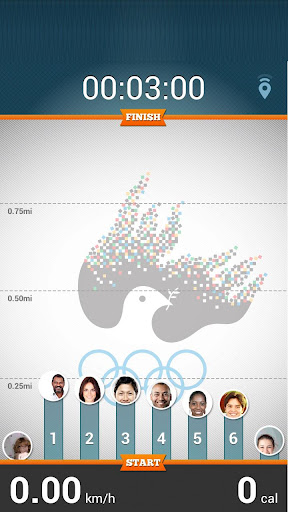 The premise of the app is to connect people in different parts of the world to each other by allowing users to walk a mile in someone else’s shoes. The app literally breaks down barriers by allowing users to partner up, compete, and take part in various competitions and races. Users in Europe, for example, can now participate virtually by running in the New York City Marathon and friends in different states can race each other and compete for social achievement using the app, making it easier to run and race against each other and stay motivated and fit.

The app also rewards users for achieving their fitness goals with points, which can be converted to items such as free music downloads, raising money for charity, or other perks.

LONDON, July 24, 2012 – SoFit Mobile, a free social gaming mobile application that lets you get fit, stay fit and earn rewards for you and others, has gone live at the 2012 London Olympic Games as the technology partner to the Walk A Mile campaign.  The free App is now live on Apple and Android mobile devices. Stemming from the saying “to walk a mile in someone else’s shoes,” the global campaign supported by the U.S. Department of State and the 2012 London Olympic Games promotes tolerance through social fitness.

“People all over the world are able to be part of the Olympic spirit with the SoFit App and make change in their communities by virtually partnering with people in different countries and walking miles together to encourage tolerance,” said Marc Askenasi, President and CEO, Founder of SoFit Mobile Inc. and parent company InterAmerican Gaming (IAG).

SoFit’s mission is to revolutionize the future of fitness by giving people the motivation to stay active through social connections, rewards and charitable donations.  Through GPS tracking, the App enables users to train and compete with friends and celebrities from around the world and participate virtually in athletic events like the New York Marathon regardless of geographic location.   SoFit users can harness the App to raise donations for charities of their choice or earn points for virtual and real-life rewards such as medals, coupons, discounts and special offers.  Charities can partner with SoFit to raise funds for miles walked in events they sponsor.

“The Walk A Mile campaign is the ideal debut partner for SoFit as we believe combining fitness with a cause fulfills our mission of making the world healthier in every way.  We are proud to be part of this amazing integration of fitness advocacy and global tolerance,” added Askenasi. SoFit will participate in tonight’s Walk A Mile Concert with Dave Stewart.