The Samsung Galaxy Note 5.3-inch phablet is currently only available on AT&T’s U.S. network. The phone is listed with AT&T’s 4G LTE network support, along with 4G HSPA+ bands that support AT&T’s network. As AT&T and T-Mobile USA operate on different 3G/4G HSPA+ bands, phones without a pentaband 3G radio will not be cross-compatible between the two largest U.S. GSM networks. However, it looks lie the Galaxy Note–the 4G LTE version of AT&T–does support a pentaband 3G radio and a hacker on XDA-Developers has found that a user can load a radio ROM that’s compatible with T-Mobile USA’s network. 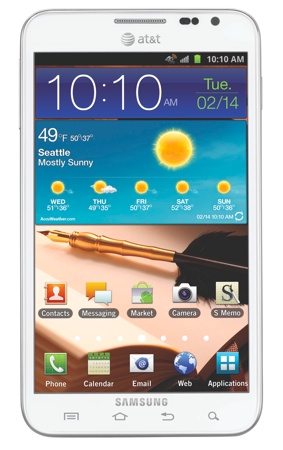 XDA hacker tomin.fhl found that by flashing a compatible T-Mobile radio ROM, the Galaxy Note will be compatible with T-Mobile’s 3G and 4G HSPA+ network. As T-Mobile does not yet operate an LTE network, users will lose the 4G LTE capability if they take AT&T’s Note for use on T-Mobile’s network.

On T-Mobile, signal strength is displayed as weaker than on an official T-Mobile device, but voice, data, and text all work fine on the foster network.

Samsung had begun to offer pentaband radios on its devices with the recent international GSM Galaxy Nexus. Pentaband radios are more typical of Nokia devices in the past, and the support of the pentaband radio allows smartphone owners to not only roam internationally without any problems, but will allow U.S. smartphone owners to switch between AT&T and T-Mobile–should they network-hop–and be able to use their same device without having to purchase new hardware.

To learn more about the hack, you can head over to XDA-Developers to learn more.