I hadn’t heard of the Solpi UMPC until this morning. Now I have. Steve “Chippy” Paine at UMPC Portal has the details on this new UMPC. Apparently, from what I read you can run XP, Vista or Win CE on the VIA chipset and it has a transreflective screen. 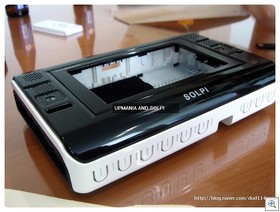 Like Frank “CTitanic” Garcia I also think this one looks a bit weird and, like Steve, I think it is a little Stormtrooper-esqe in appearance. I wonder what marketing data led folks to think that the black and white Stormtrooper look would be appealing? But then maybe that is just me.