The Solpro Helios Smart is a speedy solar charger that can gather enough power from the sun to charge up a typical iPhone or Android phone in about 90 minutes. After testing the solar charger for a month of cloudy and sunny weather it’s a great accessory to have on hand for when you lose power for an extended period, work outside for long periods or love to camp or hike away from traditional power sources.

One thing that stands out about this solar charger is that it does indeed charge fast. In about two hours the 5,000mAh battery registered a 50% charge. This is enough to charge my iPhone 6 or Galaxy S6 with power to spare.

After a little over five hours the Helios Smart registered a full charge. I did need to pause the timer during one of the tests because clouds will impact the speed at which this charges. I found that it can charge in a car window, but it didn’t charge well inside a house near a window. 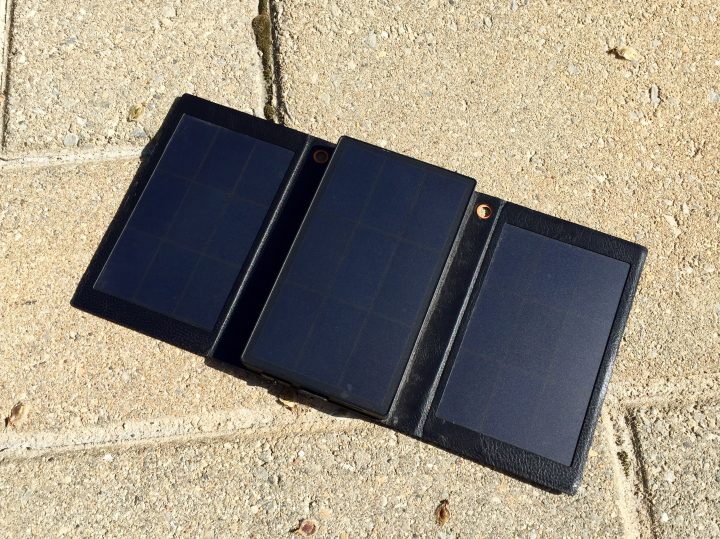 The [easyazon_link identifier=”B00UV3V37K” locale=”US” tag=”gbm-ea-20″]Solpro Helios Smart[/easyazon_link] solar charger unfolds to use three solar panels to collect sun and turn it into electricity that you can use to charge your phone or tablet. You can set this out or even strap it to your backpack while on a walk to collect energy in the battery and then charge up later so you don’t need to tether your phone to it while there is sun. When not in use a magnet keeps the solar panels closed.

There are two USB charging ports that can charge a tablet fast with a 2.1Amp output and a normal 1.0Amp output for phones and fitness trackers and other gadgets. There are small port covers that sit in the USB openings when you aren’t using them, but they are easy to lose and even with spares included I would rather see some that are connected to the charger or just not used. 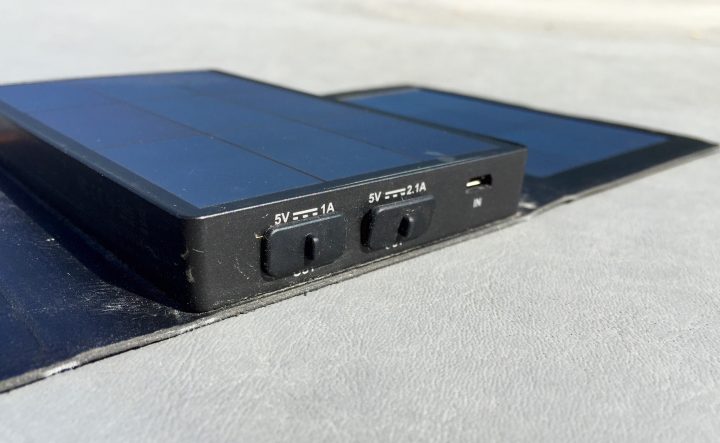 Charge two devices at the same time, including tablets or wearables.

During one of the charging tests a thunderstorm blew in and before I knew it the Solpro Helios Smart dropped off the deck about four feet to concrete and sat in the rain for an hour or more. While it is not marketed as rugged or water-resistant I was happy to see that it survived the fall and the water only a small slit on the exterior covering. I’ll do my best to keep it out of the rain going forward, but sometimes in Ohio sun turns to rain faster than we expect. This is not recommended use.

After a full charge the Helios Smart can charge my iPhone 6, Galaxy S6 or the HTC One M9 about three times. It is also handy for charging up a Bluetooth speaker, which never seems to pack enough power to last a full day of working outdoors. 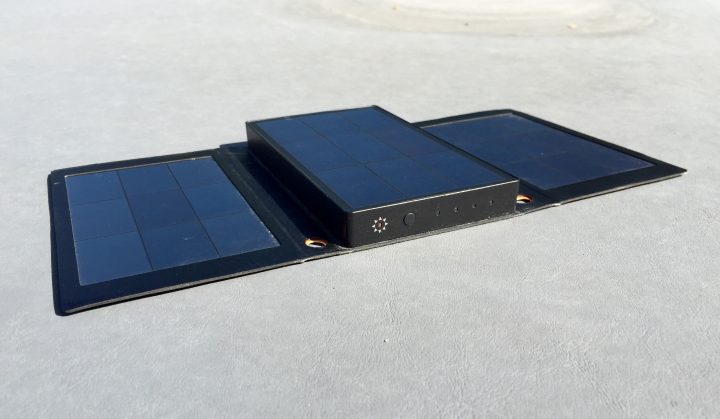 The small sun indicator lets you know if you are charging.

If you want to leave home with a charge you can plug it in to a Micro USB cord and charge up the 5,00mAh battery before you leave. You can charge two devices at once with the two USB ports at the bottom edge.

Overall the small package weighs 0.63 pounds, which is light enough to stash in a purse or backpack. If you are traveling lighter it will fit in a back pocket, but I wouldn’t sit on it. You do need to carry USB charging cables with you.

The [easyazon_link identifier=”B00UV3V37K” locale=”US” tag=”gbm-ea-20″]Solpro Helios Smart[/easyazon_link] is $119 at Amazon. Helios also offers a 20% off code to readers who buy the charger direct from SolPro and enter “Gottabemobile” as a promotion code. The is available in three colors, black, orange and white.