The new MacBook Air that Apple introduced at WWDC last week has a number of improvements over previous models. But some users are having issues with the WiFi on the new laptops.

Apple Support Forum user vhkim describes the new MacBook Air WiFi problem on a request for a fix and help,

I have a brand new Macbook Air which is able to connect to the internet for just a minute or two before suddenly it drops out. This is even though the signal still shows at full strength and all my other devices are still able to surf the net as per normal.

This device is straight out of the box so no 3rd party applications have been installed. I heard that the wifi has been upgraded to 802.11n on this machine, could that be an issue?

Do i need to return the machine or is there is a software fix for this problem?

Apple switched to a a new WiFi 802.11ac standard on the mid-2013 MacBook Airs, which could explain why the problem is affecting new users. The issue may be with the new WiFi radio or with the placement of the radio inside the new MacBook Air models.

The WiFi problems extend to many users, each with different routers and wireless setups. The wide variety makes it difficult to pinpoint the exact cause of the issue. 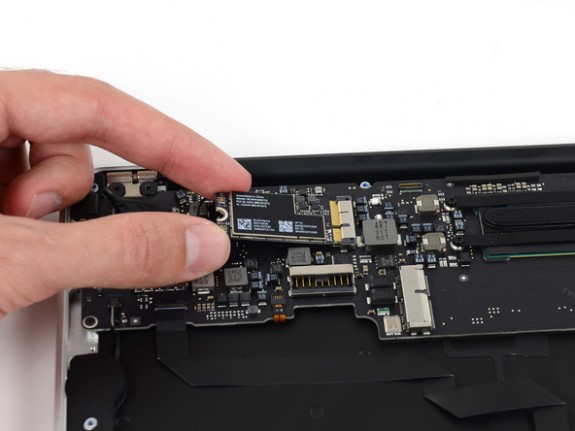 The new WiFi radio in the MacBook Air mid-2013 models could be behind connection problems. (from iFixit)

Some users who brought up the issue on Apple support problems solved the problem by updating the firmware on their WiFi router. It’s possible that other uses can resolve the issue through a similar route update.

Apple may choose to fix the issue with a firmware update, which has fixed similar issues with previous devices. The company may also slightly tweak the design of the new laptop to fix the issue for new users.