As I mentioned recently in this comparison between the iPad Air and the Surface 2, both Apple and Microsoft need to do some serious plumbing work on their respective App Stores. (Google does to.) When it comes to discovery of Apps and maintaining your purchased App collection sometimes things are just plain funky. This strikes me as odd, and the seeming acquiescence to this often random behavior by the media and tech bloggers is strange as well. But then, I guess we grow accustomed to randomness in the mobile tech world.

Just a few minutes ago I went to hit up the iOS App Store on my iPhone as part of my morning ritual. Usually I have a badge telling me that updates are waiting. Not this morning. But regardless I usually hit up the store and press the update button twice a day regardless.

I was greeted with what you see in the screen shot below: 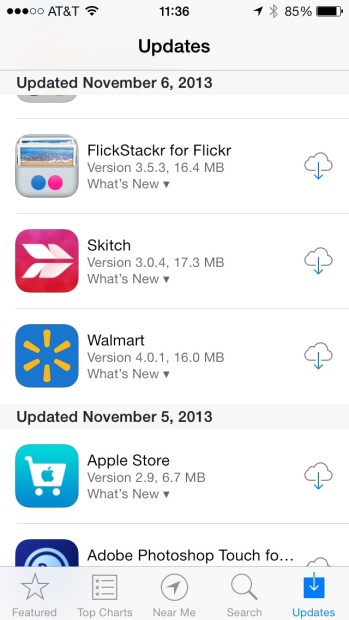 If you aren’t noticing what’s wrong right away, each of the Apps displayed in the Updates tab has a download symbol next to it. It’s that little cloud with the down arrow. Unfortunately, each of those Apps is already downloaded on my iPhone. (I checked to makes sure nothing was more seriously wrong.)

Occasionally when some weird randomness like this occurs in the App Store App, I can just close the App and things will correct themselves. But, this time I had to reboot the phone in order for things to get right once again.

Maybe I’m being picky, but it seems to me that this kind of random behavior would be a bit offsetting to consumers who might not be just a little less tech savvy. Regardless of whether or not I’m being picky, I do think it is time that Apple and its competitors cleaned up their online stores a bit. They certainly wouldn’t expect those kind of display errors in their more traditional stores. And call me crazy, but I think we just accept things a little too easily simply because, well, you know, it’s the Internet and all.