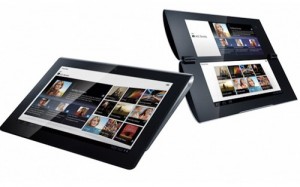 News leaked a few months ago that Sony was working on a gaming tablet. In the last couple weeks, we’ve received confirmation and an official reveal  by Sony of not one, but two gaming tablets – a larger, more traditional tablet and a smaller clamshell device seemingly designed to compete more directly in the gaming niche with the DS. Both devices will be branded with the Playstation name, so we know for sure the market they’re aiming for.

What really interests me here is the idea of a gaming-only tablet. To start with, the iPad is pretty close to a gaming tablet. While the device does a little bit of everything, recent surveys show that a vast majority of users play games on their iPad – far more than the percentage for any other activity save checking email. Plus Apple’s developer partners have helped develop a strong lineup of games for the iOS, and Android is quickly catching up. Moreover, if you want to spend more than $500 on a tablet (the S1 is rumored to sell for close to $600 with WiFi only when it launches later this year), is it a good idea to choose a niche where device owners tend to spend far less on gaming-only devices?

The Playstation S1 will likely offer a number of other features. Sony has its own music streaming and download services, and the devices (the smaller one as well) will both run the tablet edition of Google Android (likely Honeycomb presuming the devices ship in September as planned). That means they will be very similar to most other tablets in the field, but with the Playstation brand attached.

Now, I’m a big fan of specialization. I feel that tablet PCs will truly start to evolve when companies look for specific niches where they can solve problems using touch screen technology. Some companies are starting to make that move, albeit cautiously, as everyone is still much too eager for a piece of Apple’s tablet pie.

As technology develops, we’ll likely see more moves like Sony’s as companies create content that is designed specifically for one audience. However, the real question is whether Sony can successfully port the Playstation experience to a tablet gaming device or whether these new devices are simply a swipe at Apple’s lucrative market and slow encroachment on the gaming market. Will the S1 run Playstation games? Will developers create games specifically for Sony’s devices? Or will it be an Android tablet with a familiar name?

The answer to that question should be interesting not only for Sony’s legions of gaming fans, but for any manufacturers out there interested in getting into niche markets within the tablet industry. How will these devices actually stand out from the ones we already have? What do you think – will Sony pull off something revolutionary with the S1 and S2 tablets, or are they destined to be one of many attempts in 2011 to cash in on a hot trend? Will we see a dedicated gaming tablet and if so, what does it need to be successful with its target audience?