Sony announced the long-awaited PlayStation 4 (PS4) console at an event in New York City today. The PS4 will launch in time for the 2013 holiday shopping season. Unfortunately, Sony failed to announce what the PS4 will cost or show what it will look like. Sony’s PS4 is its first new game console since the PlayStation 3 debuted in 2006.

Sony’s two-hour presentation was filled with plenty of technical information and demonstrations,  but company representatives didn’t bother to show the actual product they were promoting.

The new PlayStation 4 represents a big graphics performance leap over the current PlayStation 3. While current consoles look great by most standards, gomes on the PS4 can show more detail. For example gamers will be able to see individual fiberglass threads in high-end car’s finishes in racing games. Ubisoft CEO Yves Guillemot called the console a “quantum leap” in graphics performance when introducing the company’s new Watch_Dogs game on stage at the PS4 launch event.

The PlayStation 4 will compete against Microsoft’s rumored Xbox Durango which will likely also come to stores this holiday season.

Sony will open the PS4 to free-to-play or freemium games which are popular on mobile devices.

The PlayStation 4 will once again increase the gap between mobile and console games, though the console takes at least one queue from mobile devices. The PS4 will be able to to quickly suspend and resume games, which means players gan get into and out of games on the console as easily as they can on mobile devices.

The new PlayStation 4 will be easier for developers to create game for and port games to. The console uses an x86 processor, and enhanced PS graphics card and 8GB of RAM. For gamers that means more PC games will come to the PlayStation 3, and the two versions will likely play very similarly.

A great example of this is that Blizzard will bring its Diablo III to the PlayStation 4 with four-player co-op on the same screen.

The controller for the PlayStation 4, which Sony calls the DualShock 4, uses a touchpad that looks similar to the backtouch pad on the Playstation Vita. The touchpad is paired with the traditional PlayStation button and analog stick layout. The controller also features a new share button that will let gamers easily share video fo their games as they play them.

The DualShock 4 controller also includes a light bar so a new dual-camera 3D sensor can track the controller as players move it around. It sounds similar to the Move controller, but without the specialized buttons. 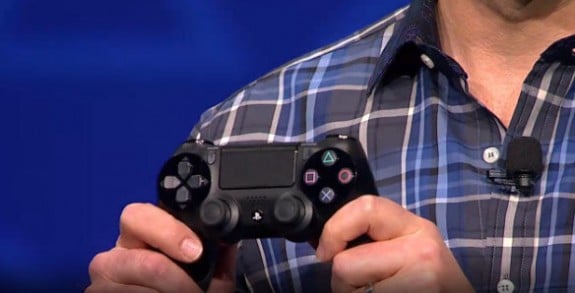 Sony is marketing the PS4 as more than just a game console by emphasizing its social experience.  PlayStation 4 users will be able to use smartphone and tablet companion apps to interact with their PlayStation friends. The apps will also lets gamers watch live gameplay video and challenge other gamers to a game.

In the future Gaikai’s technology can stream PlayStation 3 games to the PlayStation 4, though it sounds like the feature isn’t ready yet. The PS4 doesn’t natively play PS3 games because of the new CPU architecture.

Sony also added the ability to play new games as they download to the PS4, which is a feature unique to this console. PC gamers have to download very large files to play games.

At the event Sony also brought in a number of developers to show off new games for the console. Those games include Infamous: Second Son, Drive Club, The Witness and Destiny, the new game from Halo-developer Bungie.