Microsoft’s Xbox 360 has been the only video game console to feature Minecraft for years, however the console won’t be able to use one of the world’s most popular survival/sandbox games to bludgeon Sony’s PlayStation consoles for much longer. Sony has announced that Minecraft will arrive on the PS3 tomorrow.

Sony shared the game’s launch date in a blog post this morning, saying that PS3 users should expect the game to be available tomorrow in North America only. While the game’s art design might give off the impression that it’s simply a throwaway title for children and casual gamers, Minecraft is an enormously successful game that highlights Sony’s recent success in luring independent developers away from Microsoft’s Xbox. 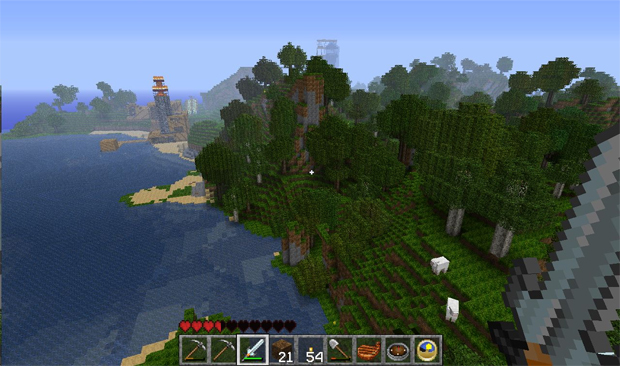 The in-game world of Minecraft.

Minecraft’s arrival on the Xbox 360 was originally seen as a large coup for the console. Microsoft used the game and other independently developed titles to sell more consoles to users who value smaller titles along with big-name titles like Halo.

Read: Sony Talks Up PS4 Gaming, In Jab at Xbox One

Sony was able to use these shortcomings and the somewhat tone-deaf responses coming from Microsoft to capture the hearts and minds of indie developers who had previously worked exclusively with Microsoft.

Sony says that Minecraft for the PS3 will have exclusive skins and other content packs going forward. To be clear, Sony has only confirmed that the PS3 version of the game will launch tomorrow. Today’s blog post does note that PS4 and PS Vita editions of the game are in active development, however users shouldn’t expect them to launch until sometime next year. Sony hopes that having Minecraft will help it gain a foothold with users who prefer smaller, more boutique titles.

Minecraft is available on Android, iOS and PC. There is a version in development for the Xbox One, however Microsoft nor Mojang, have announced a release date for it.