Sony’s announcement of the Xperia Tablet Z came with a surprise–it’s the thinnest tablet to be released to date with a thickness of just 6.9 mm, besting Apple’s iPad mini’s 7.2 mm girth. Sony’s untimely announcement of the Xperia Tablet Z is unclear as the Japanese electronics-maker could have introduced the tablet at the Consumer Electronics Show earlier this month or waited until next month to unveil the slate at Mobile World Congress. Regardless, the Xperia Tablet Z is an attractive tablet with some powerful specs, and we’ll have to wait to see how it performs in real world situations.

The unfortunate side note of Sony’s press release is that this tablet, so far, is only geared at the Japanese market. It’s unclear if Sony will release the slate elsewhere in the world, but likely Sony may bring the Xperia Tablet Z to other markets eventually. 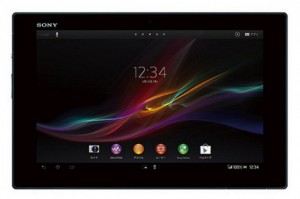 The Xperia Tablet Z will come with some high-end specs, like a 10.1-inch 1920 X 1200 full HD display, quad-core processor, a back-side illuminated rear 8-megapixel camera sensor, which is being promoted for low-light photography. The tablet will also support 4G LTE networks as well as NFC capabilities. It will be available in black or white when released.

And despite its slimness, the Xperia Tablet Z will share the water resistant and dust-proof capabilities of the smaller Xperia Z smartphone that was announced at CES.

Additionally, Sony is promoting the audio capabilities of its newly redesigned tablet. The Xperia Tablet Z has S-Force Front Surround 3D to enhance the audio experience. It’s unclear how the qualitative sound quality compares to HTC with Beats Audio integration or the front-facing speakers on Samsung’s Galaxy Tab 2 10.1 tablet.

The Xperia Tablet Z essentially will succeed and replace the original Tablet S and the Xperia Tablet S’s folded-over magazine design, which sacrificed thinness for better grip and ergonomics.