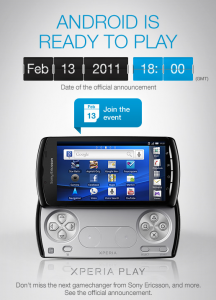 Verizon Wireless will also be scoring the PlayStation Phone by the name of the Sony Ericsson XPERIA Play for its network. According to Phone Arena, news of the XPERIA Play headed to Verizon comes by way of Wirefly.

The XPERIA Play is expected to be announced at Mobile World Congress next week. The phone will launch with Android 2.3 Gingerbread and a 4-inch WVGA screen that may use the same Bravia Engine that’s present on the XPERIA Arc. The phone will feature, instead of a sliding keyboard, a landscape-oriented sliding game controller as part of its PlayStation heritage.

Users on Verizon who are on the fence about the CDMA iPhone 4 will now have another possibility for a smartphone for their carrier of choice.