Perspective users keeping an eye out for the next-generation of Sony devices and accessories have a new day to focus on: September 4th. That’s when Sony has scheduled its next major press briefing and when it’s expected to launch such new devices as the Sony Honami or Xperia i1 and its new line of lens-cameras.

While the invitation sent out to members of the press including AndroidCentral doesn’t hold any clues on what Sony could be preparing to announce, the past few months have been filled with leaks of products that haven’t been formally announced yet. Many of those announcements or rumored could be coming during the upcoming IFA press conference. 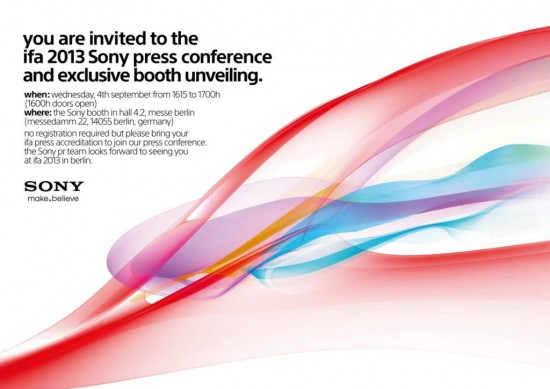 That includes the Sony Xperia i1. Leaks about the device’s features have indicated that it will reportedly, have enhanced photo taking abilities thanks to a rear-facing 20 megapixel sensor that measure 2/3-inch in diameter. A camera sensor that size with that amount of sensitivity would indicate that Sony is preparing to take on other camera-centric smartphones like the Nokia Lumia 1020.

The device is also rumored to feature a 5-inch High-Definition display, 16GB of on-board storage and 2GB of RAM.

Sony is also expected to announce its new line of lens-cameras, that is external lens that attach to iPhone and Android devices and act as a sort of camera replacement. Just this past week, pictures surfaced of the DSC-QX10 and DSC-QX100, both of which, have built-in imaging sensors, an imaging processor, an SD card slot, NFC or near field communication technology, Bluetooth and Wi-Fi connections.

Rumors have pointed to the DSC-QX10 having a 10x optical zoom lens with an 18 megapixel sensor that is used in the Sony WX150 professional-grade camera.

The DSC-QX100 could top even that with a 1-inch sensor that’s been taken from the Nikon 1 camera system that’s used by many professional photographers.

Camera sensors as accessories could make the reignited war over how many megapixels a smartphone’s camera has, moot. That’s because users can focus on purchasing the device that they want, and simply by one of these lens-cameras when they need enhanced photo-taking abilities.