With a starting weight of 1.92 pounds for the VAIO Pro 11, Sony is claiming that this pro-targeted Ultrabook is the lightest yet in the industry. Taking advantage of Sony’s experience of using carbon fiber, both the VAIO Pro 11 and the VAIO Pro 13 use this lightweight material on the lid and chassis while offering an aluminum plate for the wrist rest area. And the 13-inch model isn’t much heavier than the 11-inch offering either, clocking in at a mere 2.34 pounds. 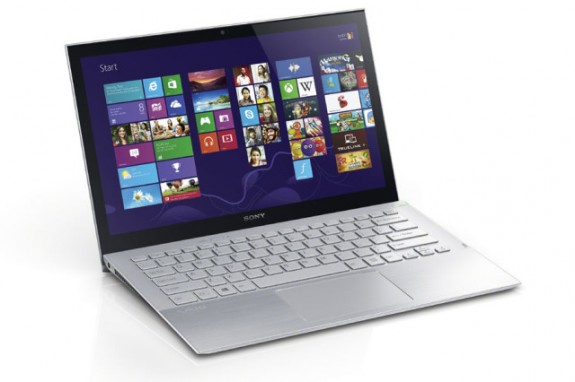 The VAIO Pro series essentially replaces Sony’s now discontinued portable Z Series. Gone from the Z are the optical disc drive as well as a dedicated GPU in favor of using Intel’s fourth generation Core i5 Haswell processor and the chipset’s integrated GPU.

Both models use Sony’s TRILUMINOS display tech for a wide color gamut and come with a full 1080p HD display. The 13-inch model will feature a touchscreen, a feature that will be missing on the 11-inch model at this time. Sony claims that it will be using a PCIe SSD drive to deliver even faster performance than traditional SSDs.

Though you’re losing the dedicated GPU, Intel’s integrated graphics has been greatly improved and the starting prices for both slates are impressive. Whereas the compact Z Series hovered around the $2,000 entry price, the starting price for the 11-inch is $1150 and the 13-inch model starts at $1250. Both models will be available in either black or silver starting June 9.

The VAIO Duo 13 is an updated hybrid slide model, a category that was occupied by last year’s VAIO Duo 11. Like the VAIO Pro series, Sony is using carbon fiber to keep its VAIO Duo 13 light, clocking in at just under 3 pounds. And while the 13-inch model has a larger display size than last year’s 11-inch panel, Sony is minimizing the bezel area to keep roughly the same footprint in a move that’s similar to what Samsung had done moving from the Galaxy S3 to the Galaxy S4 smartphone. 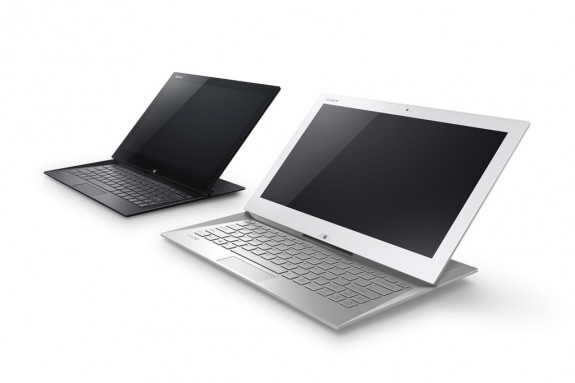 The sliding mechanism is also improved with a new Surf Slider design with a smaller hinge that’s easier to open with just one hand when users are switching between a traditional laptop-style mode to tablet mode.

The model features a capacitive touch display along with an active digitizer. Sony had used N-Trig’s digitizing technology on the Duo 11.

The hybrid features an 8-megapixel Exmor RS camera sensor that can be used for picture taking or scanning documents with the CamScanner app.