Prior to landing his role as CEO of Sony, Kaz Hirai had been instrumental in helping to shape Sony’s tablet efforts. As Sony is organizational operated as independent divisions, it is said that the company had four different divisions develop four unique tablets simultaneously. The User Experience Group had ultimately in the end scrapped three of the four tablet models and chosen to go with the Tablet S, a 9.4-inch Playstation certified tablet. 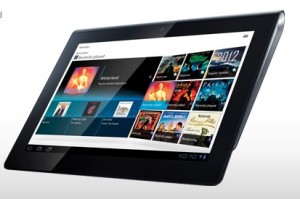 Under Hirai, Sony will hopefully change its organization structure so that organizations will begin cooperating than competing. In the past, the home theater and Walkman divisions could not launch their own digital media store fronts because those units could not get agreements from Sony’s own music and media groups.

Sony has been working to integrate its expertise as of late. Many of the company’s recent smartphones contain technologies from other groups. The flagship XPERIA S, for example, utilizes imaging sensors from Sony’s camera group and has the Bravia display engine from the company’s home entertainment division.

The Wall Street Journal article did not detail how the company came to developing the Tablet P, which is a dual-screen tablet model.