With just hours to go before it’s set to take to the stage at IFA 2013, a video leak could give perspective Sony Lens-camera users their first in-depth look at the features of the two CyberShot of the first two models set to début tomorrow.

In the video, which is now available on YouTube, a user is seen taking advantage of the DSC Qx10 and DSC-QX100 to capture shots while out and about. After grabbing one of the models, the subject of the video walks around town capturing photos and video using with the DSC QX100 by pairing it with his Sony Xperia smartphone and then using the lens-camera’s arms to attach it to his device.

As showcased in the video, users can also pair the DSC Qx10 and DSC-QX100 camera lens to their device and use the two separately. In this case, the person being featured in the video was able to use the DSC-QX100 itself to capture photos from places ordinary cameras simply wouldn’t fit. 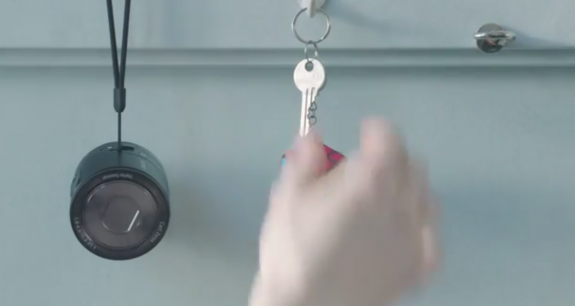 According to the manuals and other information that leaked out about the devices in the past two weeks, users will be able to pair the device to their smartphone using NFC (near-field communication technology) and Bluetooth. Users will also be able to insert memory cards inside the lens-camera itself, instead of relying on the storage built into their smartphone.

Leaks earlier today, depicted both of the Sony QX camera-lens being paired to a smartphone using two different types of attachment connectors. For example, the DSC-QX10 is seen pairing with a Sony device using a magnetic shell, and a sort of hook-shaped latch mechanism in the case of the Xperia Z1 Honami flagship device.

Sony is expected to announced the new camera-focused Xperia Z1 flagship along it’s new series of lens-cameras at tomorrow’s event.

While users will have to wait for the final product before judging the device based on it’s own merits, if the QX lens cameras are successful, Sony could be responsible for the next evolution of professional camera design. Instead of purchasing expensive devices that meld smartphones to bulky camera optics and Android, users would be able to effectively purchase whatever type of smartphone they like, and treat camera optics as a sort of accessory.

The pricing for either camera-lens has yet to leak.