Sony PlayStation VR: What You Need to Know

2016 is shaping up to be the year virtual reality goes mainstream, and Sony isn’t looking to get left behind. Can they really compete with the competition? Here’s what you need to know about PlayStation VR.

There are going to be three major VR releases this year. One is from Oculus; the Oculus Rift is the Kickstarter-backed project that gets credit for kickstarting (ho ho ho) the current VR trend. There’s also the HTC Vive, from one of the former smartphone giants, which was developed in partnership with Valve; it’ll run on Steam, the popular PC game distribution service.

So, with two (relative) giants in the VR field, can there really be room for a third? Sony thinks so, and this week unveiled the rest of PlayStation VR to the world. First, it should be said that VR is expensive, no matter who’s doing it. The Oculus Rift will cost $600. HTC’s version, although it comes with two VR-ready controllers and a superior tracking system, runs $800. This is on top of the fact that you need what amounts to a $1000 gaming PC to even think about running either system.

In comparison, PlayStation VR will run on top of the PS4’s hardware. Sony has sold over 30 million PlayStation 4s to date, which instantly builds a large install base – and if you don’t have a PS4, you can get one, usually with a game and a 500GB hard drive, for just $349. 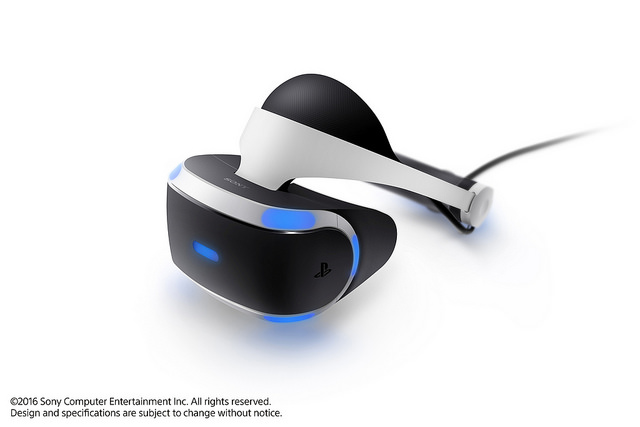 So the base system will be much cheaper for the PS VR than for either the Rift or the Vive. But what about the cost of the VR headset itself? Sony plans to retail the PS VR for just $399, coming in substantially below the competition. That means you’ll be able to go from 0 to VR for less than $800 – or the price of a Vive headset alone, never mind the graphics card or PC you need to run it.

In fairness, that doesn’t include a camera or motion controllers like the PlayStation Move – but since those aren’t standard hardware kits included in the box, developers are going to be less likely to support them…thus making them less relevant to getting the most out of the PlayStation version of virtual reality.

Update: Sony’s official PlayStation UK Twitter account confirmed that the camera is a required purchase, sold separately – so we can safely add fifty bucks or so to the price.

But can a system that’s so much more affordable really compete with the likes of Oculus and HTC? Especially when it’s running on a PS4 – hardly an expensive, cutting-edge PC. Yes and no. Sony’s been working to temper expectations, and has already come out and said that you’ll probably experience better graphics on something like the Oculus Rift; that’s hardly a surprise as gaming consoles have offered inferior graphics for a long time, now.

What is surprising is what the developers are saying. The recommended specs for the Rift and the Vive require at least an NVIDIA GeForce GTX 970 graphics card. Both systems run at 90Hz, which means you need games to run at 90 frames per second (FPS) to provide a smooth, stutter-free experience. Those developing for both devices have mentioned that if you target the Vive and the Rift, with a GTX 970 at 90 FPS, you can pretty easily achieve 60 FPS on the PS VR. That’s important. 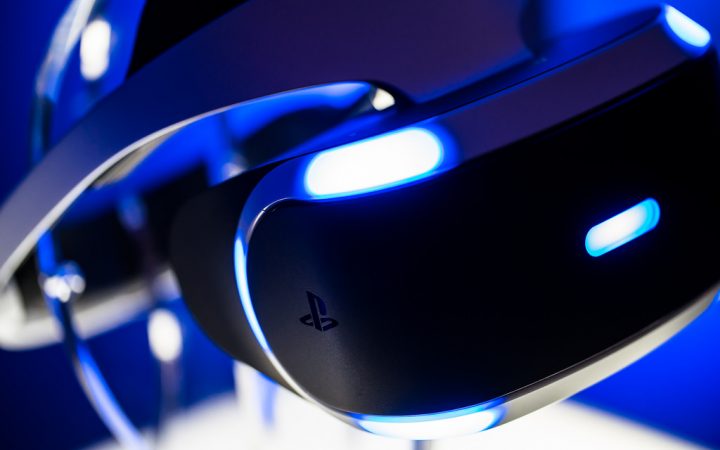 Sony is doing some interesting trickery with the PS VR to provide a fluid experience, even on the PS4’s hardware – now two and a half years old. The VR headset included with PS VR will actually run at 120Hz, or a third again as fast as the two others. That means that you should expect little to no lag – and thus superior presence, or the feeling that you’re actually in another world – on Sony’s PS VR.

While Sony would like developers to deliver experiences that would run that fast, it’s probably not terribly likely on the PS4’s current hardware – thus the inclusion of what’s called asynchronous time-warp. Async time-warp can frame jump 60Hz content to 120Hz, automatically providing a smoother experience without necessarily doubling the necessary graphics horsepower. Additionally, that frame jumping can work on native 120Hz content to smooth out any judders or slowdowns, preventing a bug or intense scene from creating motion-induced nausea. 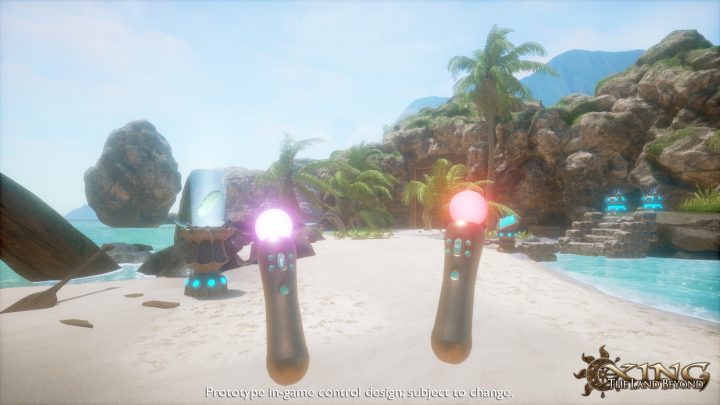 Another trick up Sony’s sleeve is the screen itself. The PS VR is built around an OLED (like the others) screen. This one measures 5.7 inches and has a resolution of 1920 x 1080. That’s lower than the 2160 x 1200 offered by the Rift and Vive, but rumors are suggesting that Oculus (and maybe HTC’s) efforts use PenTile screens, a Samsung technology that uses only two subpixels per pixel on the display – traditional screens use three. The PS VR has a traditional RGB display. If you do the math, that means the PS VR could have up to 20% more subpixels – potentially reducing the “screen door effect” that plagues some headsets.

Sony has announced that the PS VR will debut in time for the 2016 holiday season, with a current launch window of October. That means that the Oculus Rift and HTC Vive will both have roughly six months lead time before the PS VR hits store shelves. Will it be a problem for Sony?

Probably not. We talked earlier about how much cheaper Sony’s VR option is going to be – and price, more than anything else, drives the adoption of mass-market gaming. Additionally, Sony, by dint of its size and experience, will be able to demand exclusives for the PS VR that no other company can get – currently, that includes Star Wars: Battlefront, which will only be playable in VR on the PS4. 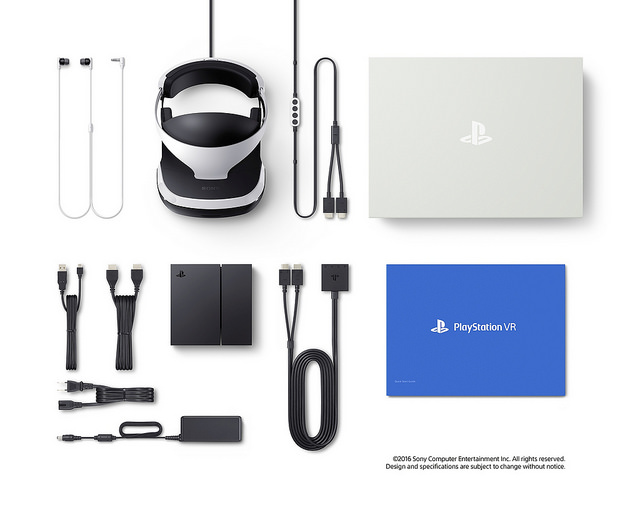 It’s not been announced precisely what this box does, but one of the big differences versus the competition is its social screen. Whatever TV is hooked up to the PS4 will get a “normal” view of what the person wearing the headset gets to see (the signal to the headset is purposely warped; when viewed through the special lenses in the headset it becomes the VR image). That means that friends will be able to share a VR experience with a single headset – and could lead to some interesting multiplayer games that won’t exist on PC.

Update: In a new blog post, Sony announced that they’ll be selling a “complete” bundle that includes everything you need to make the PlayStation VR kit work with your PS4. It’ll cost $500 (or a painful $700 in Canada), which puts it that much closer to the cost of the Oculus Rift (PC vs PS4 costs aside). Given that the PS4 didn’t come with either camera or Move controllers, it seems a safe bet that most PS VR buyers will end up going for this package rather than the base bundle.

If you pick the bundle, you’ll get the base PS VR kit (head-mounted display, cables, headphones, and a demo disc), plus the PlayStation Camera 2, two PlayStation Move controllers, plus the PlayStation VR Worlds game on disc, which combines five short VR experiences in one title (it feels similar in concept to Wii Sports). Buying the camera and controllers alone would cost you around a hundred dollars, so the bundle doesn’t seem too painful – especially because it includes the VR Worlds title – but it does seem like Sony wanted to make news for offering such an affordable VR solution (at least, in comparison to the Rift and Vive), and now they’re walking things back a bit.

The company also announced that pre-orders for the bundle (they explicitly mention that the core kit will not be made available for pre-order) will be available from select retailers starting at 10 a.m. EDT on March 22nd. This “PlayStation VR Launch Bundle” will reportedly be sold only in pre-orders and in limited quantities, but that may just be marketing speak to drum up sales. Sony says that another pre-order for the Launch Bundle will go live this summer if you miss out on the current one.