Earlier this month’s, Sony’s Kaz Hirai confirmed that his company would be focused on releasing high-end smartphones while abandoning feature phones over the course of 2013, a move that seems to hint at it trying to compete with the likes of the iPhone 5 and iPhone 6, Samsung Galaxy S3 and Galaxy S4, and quite possibly it seems, the Samsung Galaxy Note 2 and quite possibly, the Galaxy Note 3 as well. 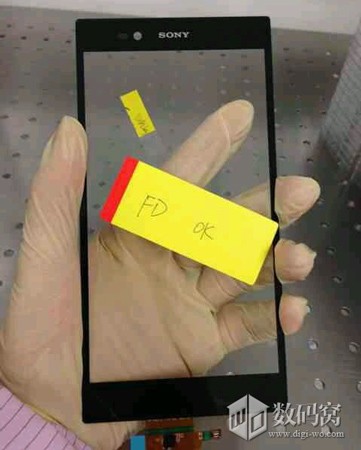 This could be a display for a massive 6.44-inch Sony Galaxy Note 2 competitor.

Images have surfaced today on Digi-wo, courtesy of Engadget, that evidently show a display taken from a production line. The display is said to be 6.44-inches in size, with 1080p resolution and headed to an as-of-yet unnamed Sony smartphone. The display shows thin bezels and it apparently doesn’t feature any hardware buttons on the bottom of the display.

If that is indeed true, it would appear that Sony might be cooking up a serious competitor to the Samsung Galaxy Note 2 which features a screen size of 5.5-inches, much bigger than most smartphones on the market. In fact, it’s so big, the device has been called a ‘phablet’ rather than a smartphone. What’s more, this device might also be a challenger to the Galaxy Note 3, a device that is said to have a massive 6.3-inch display and Exynos 5 Octa processor.

The Galaxy Note 3 isn’t expected to arrive until at least August, the month that IFA takes place, so if Sony’s device arrives before that, and with MWC 2013 on the way it certainly could, it would most likely rival the Galaxy Note 2.

Sony already took the wrappings off of its first high-end device of 2013 in the Sony Xperia Z which debuted at CES, and it looks like this 6.44-inch smartphone could very well be its next high-end smartphone for the next year.