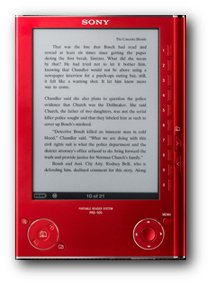 The best time to kick a rival is when he’s down, and with everyone piling on Amazon, including anti-DRM group Defective by Design, Sony could not have picked a better time to roll out new, lower-priced e-readers, the  PRS-300 and PRS-600, and lower-priced ebooks too. Per WSJ:

Sony Corp. plans to offer two new e-reader devices priced at $199 and $299, a move that intensifies competition in a burgeoning market dominated by rival Amazon.com Inc.

Sony also plans to cut the prices on best-selling e-book titles in its online store to $9.99 from $11.99, which matches the discount price offered by Amazon for users of its Kindle device and Barnes & Noble Inc.’s Fictionwise.

I’ve handled  the first  Sony Reader, but more importantly, my voracious reader of a wife has tried it too. We were both  pretty impressed, though my wife is still as loyal to  paper as I am to screen. I think it matched up pretty well against the Kindle. No reason to believe a new one won’t  match the Kindle 2. Sony’s big problem is in matching the store. When people think “bookstore,” they think Amazon and B&N; they don’t think Sony. Might be all the same books, but tell that to the mom & pop bookstores that disappeared when the  B&N or Borders  moved in to town.

SAN DIEGO, August 5, 2009 ¾ Sony is today delivering on its promise of making digital readers and eBooks accessible and affordable for consumers with the introduction of two new Readers. Part of a new Reader line, the Reader Pocket EditionÃ¢â€žÂ¢ puts a library in your hands for as little as $199. Both the Reader Pocket Edition and the Reader Touch EditionÃ¢â€žÂ¢ will be available at the end of August, at SonyStyle.com, SonyStyle stores and select retail partners. Also, new releases and New York Times bestseller titles in the eBook Store from Sony will now be available for $9.99.

““We firmly believe consumers should have choice in every aspect of their digital reading experience,Ã¢â‚¬Â said Steve Haber, president of Sony’s Digital Reading Business Division. ““Our goal is to expand the market and provide greater access to what consumers want to read when they want to read it Ã¢â‚¬” whether they buy, borrow or get it for free.Ã¢â‚¬Â

The Reader Pocket Edition sports a five-inch electronic paper display packaged in a stylish chassis and is available in a variety of colors, including navy blue, rose and silver. The Reader Pocket Edition is easy to navigate with one hand, and fits into a purse or jacket pocket. The diminutive device can store about 350 standard eBooks and provides up to two weeks of reading enjoyment on a single battery charge. It will be available for the ground-breaking price of $199, making it the most affordable dedicated reading device on the market.

The Reader Touch Edition features a responsive, menu-driven six-inch touch screen panel that enables quick, intuitive navigation, page turning, highlighting and note taking with the swipe of a finger or by using the included stylus pen. Users can take handwritten notes with the stylus pen or type with the virtual keyboard. All notes can be exported and printed out for easy reference. The Reader Touch Edition includes an onboard Oxford American English Dictionary that allows you to look up a word by simply tapping on it. The Touch Edition also offers five adjustable font sizes, as well as expansion slots for both Memory Stick ® PRO DuoÃ¢â€žÂ¢ and SD card, making your portable library virtually limitless. It comes in red, black or silver and will retail for about $299.

Both models feature Sony’s award-winning industrial design and an E Ink ® VizplexÃ¢â€žÂ¢ electronic paper display that mimics the look of ink on paper. They will ship with an attractive protective sleeve and USB cable. Sony’s eBook Library software 3.0, which now includes support for many Apple ® Macintosh ® computers as well as PCs, makes it easy to transfer and read any Adobe ® PDF (with reflow capability), Microsoft ® Word ®, BBeB ® files, or other text file formats on the Reader.

Through The eBook Store from Sony (ebookstore.sony.com), users can also access more than one million free public domain books from Google. These titles, which Google has digitized as part of its Google Books project, are available in EPUB format and are optimized for current models of the Sony Reader. From Sony’s eBook Store, Reader owners with a U.S. location can download and transfer any of these titles to their Reader, while new, U.S. located eBook Store users can access available titles after setting up an account and downloading Sony’s free eBook Library software.

Sony is also committed to working with local libraries throughout the country as they make the move to digital books. Sony Readers are compatible with the industry-standard formats that libraries use for their digital collections, so consumers can easily download perennial favorites and new releases from their local libraries and enjoy them for free.

The Reader Pocket Edition and Reader Touch Edition, as well as available accessories such as AC adaptors, cases and covers with reading lights, will be available at the end of August at SonyStyle.com and SonyStyle stores. Book lovers interested in trying out a Reader in person will also be able to find them for sale at Best Buy, Borders, Costco, Staples, Target, Wal-Mart and other authorized retailers nationwide.