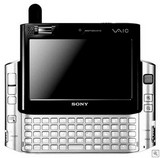 Sony follows Samsung with news that it is introducing a new model of the VAIO UX that contains a 32GB SSD (solid state disk.) They’d previously annoucned a 16GB SSD model, so this model looks like it will be aimed at those who need a little more HD space, and who have a few extra bucks to drop. The cost of these solid state drives will drop one

day, (if I repeat that enough times, maybe it will become true,) but in the meantime it remains an expensive proposition to say the least.

And also via Engadget, comes new pictures of the Sony PRS-500 eBook reader. Still no price and still no release date. I still question the market for this type of device, but with the news that the device will support RSS feeds that might change a few minds.