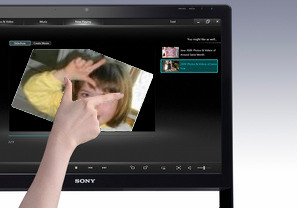 Following HP and Gateway into the multi-touch desktop space is Sony with their VAIO L Touch HD PC/TV. With no mention of Microsoft Touch Pack or custom touch functionality featured in the new Gateway One, the multi-touch screens seems to be included solely for the purpose of Windows 7 touch compliance. A bit disappointing, but better that than no touch at all. More accurate, less mocking photo after the jump. 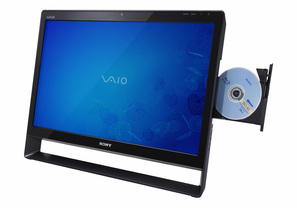 As the full product name implies, the VAIO L is more than an all-in-one desktop. It can function as an HDTV with 24″ widescreen (1920×1080) without turning on the PC, though I can’t find mention if it can play Blu-ray from the built-in drive without a full boot. The PC side offers up to Intel Core 2 Quad Q8400S processor (2.66GHz) with 6GB of memory and NVIDIA GeForce GT 240M GPU.

Quite a powerful multi-touch PC, but overall, it looks like a HDTV with a Windows 7 PC built-in. I appreciate that it supports multi-touch, but a little more attention to the touch aspects would be better. Starts at $1,300.