Sony has filed for a patent application that would allow users to control their phones more accurately without having to touch their capacitive displays as they do now on many modern smartphones. By situating the front-facing camera, which is primarily used for video chats and self portrait shots today, behind the glass touchscreen display rather than to the top of the smartphone next to the earpiece speaker, Sony hopes that this will enable the phone to more accurately pinpoint where a user is pointing to without having to touch the display. This would allow phones, tablets, and potentially even computers and other computing devices, to track a user’s finger when the user points at the display from afar without requiring the user to physically make contact with the screen. 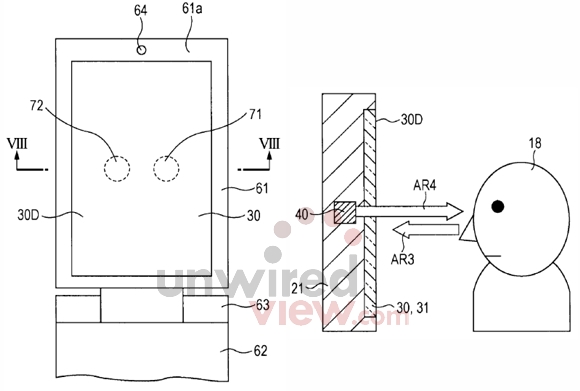 The move would enable Sony to create phones that are not quite as tall and may potentially bring us closer to a bezel-less device with an edge-to-edge screen. This would also allow users to manipulate what they see on the screen without having to mar the screen with fingerprints as well as interact with content without obstructing view of the displays on their phones or tablets when their hands and/or fingers block view of the screen when they move their finger in to touch or tap the display.

In addition to the front-facing camera, Sony hopes to use the technology to also situate the proximity sensor, ambiant light sensor, and fingerprint sensor to the rear of the touchscreen. The proximity sensor is what turns off the screen when you move the phone closer to your face and ears when you take a call and the ambient light sensor automatically dims or brightens your display when it senses the level of ambient lighting around you to make your device more usable as well as conserve battery life when you don’t need a bright screen.

It’s unclear if Sony will launch a phone or tablet with these capabilities in the future, or if the company intends on licensing the technology to rivals for use on other products.